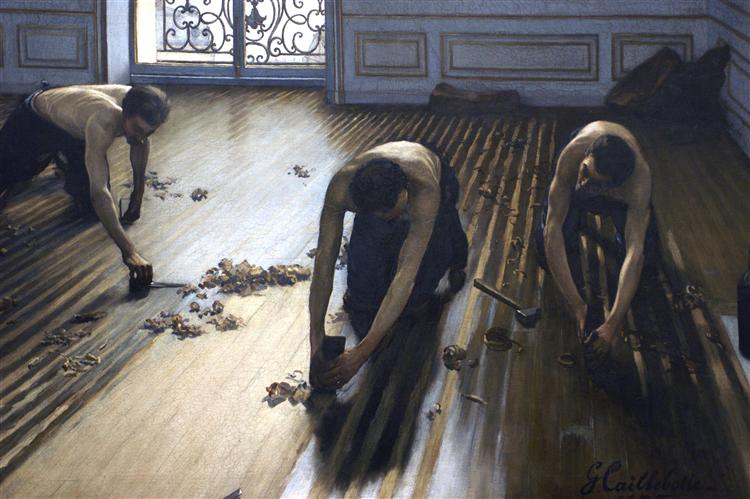 The Parquet Planers (The Floor Scrapers)

This painting is one of the first representations of the urban proletariat. Whereas peasants (The Gleaners (1857) by Millet) or country workers (The Stone Breakers (1849) by Courbet) had often been shown, city workers had seldom been painted. Unlike Courbet or Millet, Caillebotte does not incorporate any social, moralizing, or political message in his work. His thorough documentary study (gestures, tools, accessories) justifies his position among the most accomplished realists.

Caillebotte had undergone a completely academic training, studying with Bonnat. The perspective, accentuated by the high angle shot and the alignment of floorboards complies with tradition. The artist drew one by one all the parts of his painting, according to the academic method, before reporting them using the square method on the canvas. The nude torsos of the planers are those of heroes of Antiquity, it would be unimaginable for Parisian workers of those times. But far from closeting himself in academic exercises, Caillebotte exploited their rigor in order to explore the contemporary universe in a completely new way.

Caillebotte presented his painting at the 1875 Salon. The Jury, no doubt shocked by its crude realism, rejected it (some critics talked of "vulgar subject matter"). The young painter then decided to join the Impressionists and presented his painting at the second exhibition of the group in 1876, where Degas exhibited his Woman Ironing (1873). Critics were struck by this great modern tableau, Zola, in particular, although he condemned this "painting that is so accurate that it makes it bourgeois".

Les raboteurs de parquet (English title: The Floor Scrapers) is an oil painting by French Impressionist Gustave Caillebotte. The canvas measures 102 by 146.5 centimetres (40.2 in × 57.7 in). It was originally given by Caillebotte's family in 1894 to the Musée du Luxembourg, then transferred to the Musée du Louvre in 1929. In 1947, it was moved to the Galerie nationale du Jeu de Paume, and in 1986, it was transferred again to the Musée d'Orsay in Paris, where it is currently displayed.

Caillebotte’s originality lay in his attempt to combine the careful drawing, modeling and exact tonal values encouraged by the Académie with vivid colors, bold perspectives, keen sense of natural light and modern subject matter of the Impressionist movement. Painted in 1875, this work illustrates Caillebotte's continued interest in perspective and everyday life. In the scene, the observer stands above three workers on hands and knees, scraping a wooden floor in a bourgeois apartment—now believed to be Caillebotte's own studio at 77, rue de Miromesnil, in the 8th arrondissement of Paris. A window on the back wall admits natural light. The workers are all shown with nude torsos and tilted heads, suggesting a conversation. Caillebotte’s interest in the male nude, set in a modern context, has been linked to his presumed homosexuality. It must be noted, however, that it was part of a larger trend, not necessarily limited to homosexual artists, that was first introduced by Courbet in a painting of two wrestlers (Szépmüvézeti Museum, Budapest). This is one of the first paintings to feature the urban working class. It reintroduces the subject of the male nude in the painting, but in a strikingly updated form. Instead of the heroes of antiquity, here are the heroes of modern life—sinewy and strong—in stooped poses that would appear demeaning if they did not convey a sense of masculine strength and honest labor. There is a motif of curls in the image, from the wood shavings on the floor, to the pattern of ironwork in the window grill to the arched backs and arms of the workers. The repetition in the image, with the three workers engaged in different aspects of the same activity but having similar poses, is similar to works by Caillebotte's contemporary, Edgar Degas.

Despite the effort Caillebotte put into the painting, it was rejected by France's most prestigious art exhibition, the Salon, in 1875. The depiction of working-class people in their trade, not fully clothed, shocked the jurors and was deemed a "vulgar subject matter". He was hurt by this rejection, and instead showed it at the second exhibition of the Impressionists, with whom he had already associated himself, in 1876. He presented it alongside some of his other works, including a second, different version of Raboteurs from 1876, and his earlier work Jeune homme à sa fenêtre (Young Man at His Window) The images of the floor scrapers came to be associated with Degas's paintings of washerwomen, also presented at the same exhibition and similarly scorned as "vulgar".