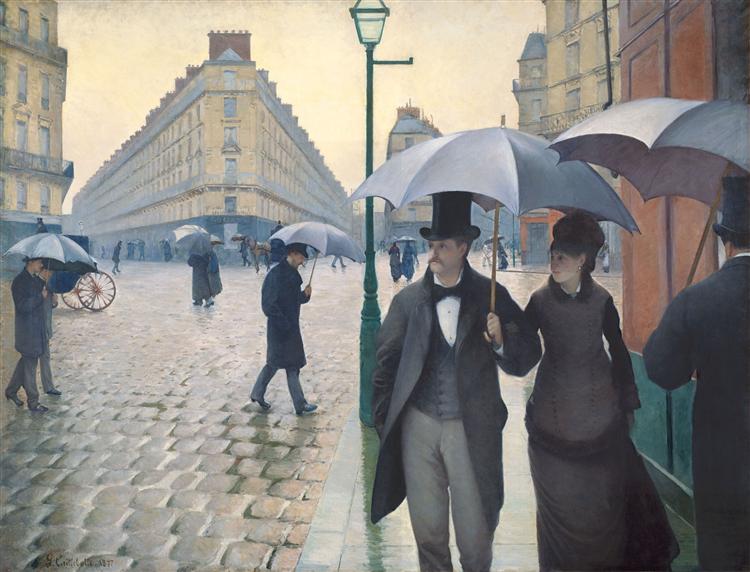 Paris Street; Rainy Day (1877) was created during a pivotal time in the artist’s career. Caillebotte was an active member of the Impressionist movement, even though he painted in a more realistic style than other members of the group. The quick and loose brushwork of Claude Monet or Pierre-Auguste Renoir emphasized motion and the fleeting effects of light on the surface. In contrast, Caillebotte’s precise brushwork and crisp detail gave the impression of a frozen moment or a photographic snapshot.

Paris Street; Rainy Day is a typical Impressionist subject, modern life in an urban setting, identified as the intersection between rue de Turin and rue de Moscou. The painting presents the urban transformation of Paris, that went through sweeping renovations of the city commissioned by Emperor Napoleon III and directed by his prefect of Seine, Baron Georges Haussmann. Caillebotte witnessed these vast transformations that were complete in 1870. Paris Street; Rainy Day shows the merging of the old and the new city: the couple and the male in the foreground walk on a narrow sidewalk that represents the old city, while a newly constructed building in the backdrop marks the emergence of the new city. The painting is populated by multiple characters placed in a zigzag pattern, which represent the range of social classes that form the urban landscape. Caillebotte most prominently featured the bourgeois class, represented by the elegant couple in the foreground. Different classes are represented to a lesser extent and can be identified by their attire and activity. For instance, a man in the background carrying a ladder is likely a worker. Similarly, the two figures passing each other in front of the second building on the left are wearing unfashionable tattered clothing that indicates their lower status.

Caillebotte exhibited the painting at the third Impressionist exhibition in 1877 together with another large street scene Le Pont de l’Europe (1876). Paris Street; Rainy Day was bought by the Art Institute of Chicago in 1964, where experts have extensively studied the painting and its many preparatory sketches and studies to better understand Caillebotte’s artistic process. Research and experiments conducted by the Institute have presented compelling evidence that Caillebotte used the optical device camera lucida for the preparatory sketches of the painting. The device would allow the artist to see the scene and the drawing surface at the same time, making it easier to determine an accurate perspective. Still, there is no documentation supporting the claim that Caillebotte ever used such a tool. Caillebotte, possibly, never discussed his methods because many proponents of Impressionism, including writer Émile Zola, criticized paintings that emulated the crispness and precision of a photograph as ‘anti-artistic’.

After the initial sketches which helped establish the essential spatial and architectural elements of the intersection, Caillebotte made character studies and even created a painted Sketch for Paris Street; Rainy Day (1877). In the sketch, he further developed the color palette and the placement of various figures. Caillebotte continued to make changes on the original canvas, like adding new characters, the two women walking away in the background. The ambitious painting represents the height of Caillebotte’s artistic achievement, as the artist would never again attempt a multi-figure composition on this scale.