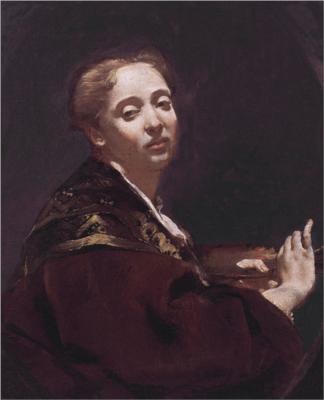 Venetian painter Giulia Lama, the first woman known to draw and study the male nude from a live model, was similar to Paladini in terms of her skills as a painter and poet, but unlike the young Pisan artist, Lama's physical appearance hindered, rather than propelled, her professional success. Nonetheless, Lama's poems are often compared to those by humanist poet Francesco Petrarch, and she possessed ample knowledge of mathematics and a passion for philosophical studies. Although very little documentation survives about her life and works, scholars have uncovered a treasure trove: 200 of her drawings featuring both male and female nudes. She is said to have been trained by her father, Agostino Lama, before studying alongside Giambattista Piazzetta (1682-1754), a rococo painter and her childhood friend. While Lama's paintings are similar to Piazzetta's in their sharp contrasts of light and shade, her technique is said to surpass his.

Giulia Lama (active mainly first half of 18th century) was an Italian painter, active in Venice. Her dark, tense style contrasted with the dominant pastel colors of the late Baroque era.

Lama was born c. 1681 in the parish of Santa Maria Formosa in Venice. She was trained initially by her father, the painter Agostino Lama. She then studied alongside a childhood friend, Giambattista Piazzetta (1682–1754), the prominent rococo painter of various religious subjects and genre paintings. Though here was debate as to whether she was a student of Giovanni Battista Piazzetta or a student who painted alongside Piazzetta at the Scuola di Antonio Molinari in Venice. However, records show that they were fellow painters, not teacher and student. As a result of learning together their styles are similar in the sharp contrasts of light and shade. They were known to be good friends, Piazzetta even painted a portrait of his friend in c.1715–20.

Lama was well known for her plain appearance, even Lama herself was well aware of this and played it up in her own self-portraits. A letter written by the Abbé Conti to Madame de Caylus in March 1728 has been very important in determining Lama's background and character. She remarks, "The poor woman is persecuted by painted, but her talent triumphs over her enemies. It is true she is as ugly as she is intelligent, but she speaks with grace and polish, so that one easily pardons her face...She lives, however, a very retired life." It also reveals that in addition to being a great painter she was gifted in mathematics, a wonderfully skilled poet, a lace maker, and an inventor. It also brings to light the opposition of male artists to the career of a woman and the prejudices regarding physical beauty, this was an issue that also confronted Rosalba Carriera.

Lama was active as a historical painter and poet in Venice from till after 1753. One of her pieces, a Crucifixion altarpiece remain in situ at San Vitale. She had a successful career in private and public figure painting. Giulia Lama appears to have been the first woman to break the barrier against women studying and drawing the nude figure from life. Over 200 drawings that were recently discovered clearly show that she indeed studied both male and female nude figures during her training. She had public success in a style that was typically a position held by men, giving rise to opposition from her male counterparts who were not prepared to tolerate such competition. That she was able to compete at all is amazing because painting human subjects required study of the human figure and particularly the nude figure, and most women of her era did not have access to study nudes.

As a highly trained professional, she was just as capable of painting a sensitive portrait such as, Young Man with a Turban, as she was of carrying out large, original commissions, such as altarpieces, with confidence. It is through the identification of three such altarpieces in a Venetian guidebook of 1733 that Lama's artistic personality began to be reconstructed. That she was as fully competent as the male artists with whom she competed is demonstrated by the names to which her work has been attributed. Recovery of Lama's oeuvre has required reattribution of works by not only Piazzetta, but also artists such as Federico Bencovich, Domenico Maggiotto, Francesco Capella, and Zurbarán, among others.