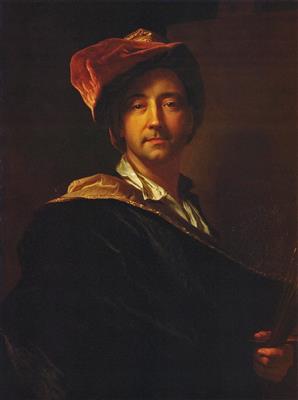 Hyacinthe Rigaud (French pronunciation: [ʁigo]; 18 July 1659 – 29 December 1743) was a French baroque painter most famous for his portraits of Louis XIV and other members of the French nobility.

Hyacinthe Rigaud was born in Perpignan (Pyrénées-Orientales), the grandson of painter-gilders from Roussillon and the elder brother of another painter (Gaspard). He was trained in tailoring in his father's workshop but perfected his skills as a painter under Antoine Ranc at Montpellier from 1671 onwards, before moving to Lyon four years later. It was in these cities that he became familiar with Flemish, Dutch and Italian painting, particularly that of Rubens, Van Dyck, Rembrandt and Titian, whose works he later collected. Arriving in Paris in 1681, he won the prix de Rome in 1682, but on the advice of Charles Le Brun did not make the trip to Rome to which this entitled him. Received into the Académie royale de peinture et de sculpture in 1700, he rose to the top of this institution before retiring from it in 1735.

Since Rigaud's paintings captured very exact likenesses along with the subject's costumes and background details, his paintings are considered precise records of contemporary fashions.

Rigaud was born with the Catalan name Jyacintho Rigau or Jacint Rigau i Ros This is variously translated as Híacint Francesc Honrat Mathias Pere Martyr Andreu Joan Rigau – in Perpignan, which became part of France by the Treaty of the Pyrenees (7 November 1659) shortly after his birth.

Rigaud was baptised with his Catalan name in the old cathédrale Saint-Jean de Perpignan on 20 July 1659, two days after his birth at rue de la Porte-d'Assaut. He would not have become French had not Roussillon and the Cerdanya been annexed to France the following 7 November thanks to the Treaty of the Pyrenees. That Treaty also put an end to the wars that had taken place between France and Habsburg Spain since 1635 and married King Louis XIV of France to the infanta Maria Theresa of Spain.

Hyacinthe's father, Josep Matias Pere Ramon Rigau, was a tailor (sastre in Catalan) in the parish of Saint-Jean de Perpignan, "as well as a painter", descended from a line of well-established artists in the Perpignanian basin who had been commissioned to decorate several tabernacles and other panels for liturgical use. Few of these have survived to the present (Palau-del-Vidre, Perpignan, Montalba-d'Amélie, Joch...). Hyacinthe's grandfather, Jacinto major, and even more Jacinto's father, Honorat minor, were heads of the family and the local art world from 1570 to 1630 ; probably as much as gilders as painters, since in their studios were to be found "many prints and books treating on the art of painting, and other things, such as brushes and palettes for painting".