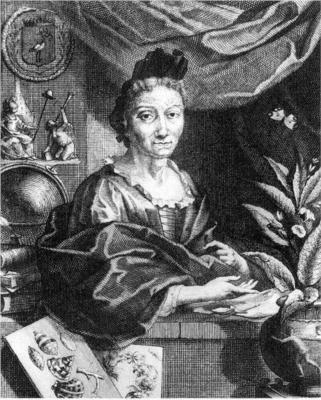 Copperplate by Jacobus Houbraken from a portrait by Georg Gsell

Maria Sibylla Merian (2 April 1647 – 13 January 1717) was a German-born naturalist and scientific illustrator, a descendant of the Frankfurt branch of the Swiss Merian family. Merian was one of the first naturalists to observe insects directly.

Merian received her artistic training from her stepfather, Jacob Marrel, a student of the still life painter Georg Flegel. Merian published her first book of natural illustrations in 1675. She had started to collect insects as an adolescent and at age thirteen she raised silk worms. In 1679 Merian published the first volume of a two-volume series on caterpillars, the second volume followed in 1683. Each volume contained 50 plates engraved and etched by Merian. Merian documented evidence on the process of metamorphosis and the plant hosts of 186 European insect species. Along with the illustrations Merian included a descriptions of their life cycles.

In 1699 Merian travelled to Dutch Surinam to study and record the tropical insects. In 1705 she published Metamorphosis insectorum Surinamensium. Few colour images of the New World were printed before 1700 and thus Merian's Metamorphosis has been credited with influencing a range of naturalist illustrators. Because of her careful observations and documentation of the metamorphosis of the butterfly, she is considered by David Attenborough to be among the most significant contributors to the field of entomology. She was a leading entomologist of her time and she discovered many new facts about insect life through her studies.

Maria Sibylla Merian's father, the Swiss engraver and publisher Matthäus Merian the Elder, married her mother, his second wife, Johanna Sybilla Heyne, in 1646. Maria was born within the next year in 1647, making her his 9th child. Her father died in 1650, and in 1651 her mother remarried the flower and still life painter Jacob Marrel. Marrel encouraged Merian to draw and paint. While he lived mostly in Holland, his pupil Abraham Mignon trained her. At the age of thirteen she painted her first images of insects and plants from specimens she had captured. Early on, she had access to many books about natural history. Regarding her youth, in the foreword to Metamorphosis insectorum Surinamensium, Merian wrote:

In May 1665, Merian married Marrel's apprentice, Johann Andreas Graff from Nuremberg; his father was a poet and director of the local high school, one of the leading schools in 17th-century Germany. In January 1668, she had her first child, Johanna Helena, and the family moved to Nuremberg in 1670, her husband's home town. While living there, Merian continued painting, working on parchment and linen, and creating designs for embroidery. She also gave drawing lessons to unmarried daughters of wealthy families (her "Jungferncompaney", i.e. virgin group), which helped her family financially and increased its social standing. This provided her with access to the finest gardens, maintained by the wealthy and elite, where she could continue collecting and documenting insects. In 1675 Merian was included in Joachim von Sandrart's German Academy. Aside from painting flowers she made copperplate engravings. After attending Standrart' school she published flower pattern books. In 1678, she gave birth to her second daughter Dorothea Maria.