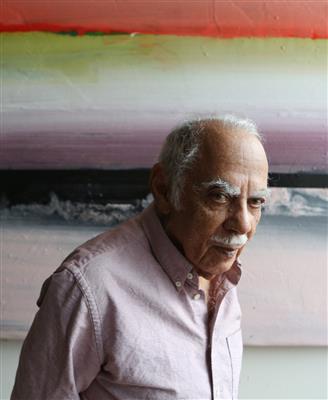 Edward Clark, also known as Ed Clark (May 6, 1926 – October 18, 2019), was an American abstract expressionist painter and one of the early experimenters with shaped canvas in the 1950s.


Edward Clark was born May 6, 1926 in the Storyville section of New Orleans, Louisiana. He served during World War II in the US Air Corps, stationed in Guam.


Ed Clark studied from 1947 to 1951 in The Art Institute of Chicago with Helen Gardner and Louis Ritman. Under the GI Bill of Rights which financed the higher education of recruits, Clark took residence in Paris in 1952. He enrolled at the Académie de la Grande Chaumière where he studied until 1953.


Edward Clark returned to New York City in 1956. He and Ted Jones (painter) were the first Afro-Americans that actively participated in the New York City Tenth Street galleries. Clark had his first one-man show in 1958 in the Brata Gallery. After the show he soon returned to Paris where he continued to show.


Clark was the first Afro-American painter credited with working on a shaped canvas, an innovation that influenced contemporary art through the 1950s and 1960s. He was also known for his powerful brush stroke achieved with a push broom, large-scale canvases, and his vibrant use of color. He arrived in Paris each summer and returned to New York City. He had number of well received exhibitions in both continents.


Ed Clark's paintings are included in the permanent collections of The Art Institute of Chicago; the Detroit Institute of Arts in Detroit, Michigan; the Studio Museum in Harlem in New York City; the Metropolitan Museum in New York, NY; the Museum of Modern Art in New York, NY; the California Afro-American Museum in Los Angeles, California, the Kresge Art Museum at Michigan State University in East Lansing, Michigan; the James E. Lewis Museum of Art at Morgan State University in Baltimore, Maryland; the Museum of Solidarity in Titograd, Yugoslavia; the Museum of Modern Art in Salvador, Bahia, Brazil; the Centro de Arte Moderno in Guadalajara, Mexico; and The John and Mable Ringling Museum of Art in Sarasota, Florida, among others.


In 2013, Clark was presented with the Art Institute of Chicago's Legends and Legacy Award, in recognition of what it called his "pioneering paintings."


In 2014, upon viewing an exhibit of Clark's work at the Tilton Gallery, New York critic Barry Schwabsky wrote in The Nation, "He is, simply, one of the best living painters." He continued, "Paint as a literal, physical presence and as a trace of the artist's mental and physical activity becomes inseparable from the evocation of the glory of light."


Reviewing a Museum of Modern Art show in 2017, New York Times critic Roberta Smith wrote that in a gallery that also included paintings by Willem de Kooning, Elizabeth Murray, Alma Thomas and others, she was most taken by "an effortless, thrilling abstraction full of floating light," an untitled work by Clark. She went on to say Clark has "devoted most of his long career to handling large brushes and gorgeous color with the matter-of-fact, quietly flamboyant flair seen here."