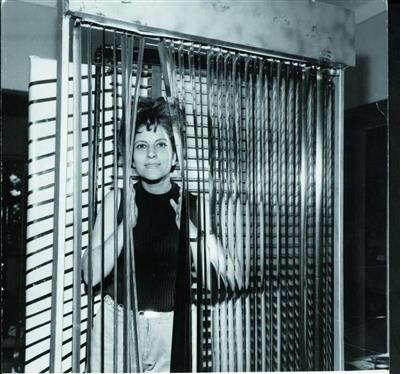 Behjat Sadr also known as Behjat Sadr Mahallāti (Persian: بهجت صدر‎, 29 May 1924 - 11 August 2009) was an Iranian modern art painter whose works have been exhibited in New York, Paris, and Rome. Sadr is known for her paintings that utilizing a palette knife on canvases to create impressionistic paintings featuring visual rhythm, movement and geometric shapes.


Sadr's first major exhibition was at the twenty-eighth Venice Biennial in 1956. In 1957, Sadr returned to the University of Tehran as a member of faculty and taught there for almost 20 years. There she met and married her second husband Morteza Hannaneh (a well known Iranian musician and composer) and had her only daughter, Kakuti (Mitra). Awarded the Royal Grand Prize at Tehran Biennial 1962.


In 1979, after the Islamic Revolution in Iran started Sadr and her daughter moved to Paris.


Sadr was diagnosed with breast cancer in the late 1990s, but continued to paint. She died at age 85 of a heart attack on 11 August 2009 in Corsica.


Sadr was the first female contemporary painter to be considered on the same level as her male colleagues in Iran.


In 2006, Sadr was the subject of a documentary film called Behjat Sadr: Time Suspended, directed by Mitra Farahani. Which includes footage of the artist at work as well as extensive interviews.