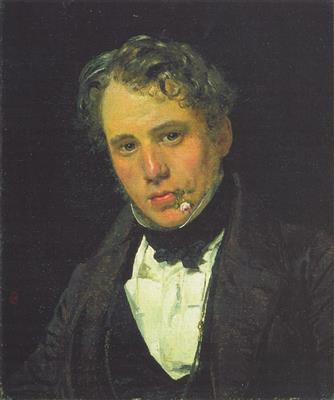 Nicolai Wilhelm Marstrand (24 December 1810 – 25 March 1873), painter and illustrator, was born in Copenhagen, Denmark, to Nicolai Jacob Marstrand, instrument maker and inventor, and Petra Othilia Smith. Marstrand is one of the most renowned artists belonging to the Golden Age of Danish Painting.

Nicolai Wilhelm Marstrand (24 December 1810 – 25 March 1873), painter and illustrator, was born in Copenhagen, Denmark, to Nicolai Jacob Marstrand, instrument maker and inventor, and Petra Othilia Smith. Marstrand is one of the most renowned artists belonging to the Golden Age of Danish Painting.


Marstrand studied at Copenhagen's Metropolitan School (Metropolitanskolen), but had little interest in books, and left around 16 years of age. Christoffer Wilhelm Eckersberg, painter and professor at the Royal Danish Academy of Art (Det Kongelige Danske Kunstakademi) in Copenhagen, was a close friend of Wilhelm's father, and it was to all appearance Eckersberg who recommended an artistic career for young Wilhelm. Wilhelm had already shown artistic talent, tackling difficult subjects such as group scenes with many figures and complicated composition.


At 16 years of age Marstrand thus began his studies at the Academy under Eckersberg, attending the school from 1826 to 1833. Although his interests had a firm hold in genre themes – depiction of the daily life he observed around him in Copenhagen's streets, especially middle class society – he would soon reach for the pinnacle of Academic acceptability: the history painting.


History painting displayed what was grand – classical themes from mythology and history, rather than daily life. The traditions, and the taste of traditional art critics, strongly favored it. It was therefore something to strive for, in spite of Marstrand's equal skill at depicting more modest themes, and of the enjoyment he had in portraying the crowds, the diversions of the city, and the humor and story behind the hustle and bustle. Marstrand's creative production would, through many paintings and illustrations made not only during the 1830s but throughout his life, never abandon this inclination toward displaying the simple life of his times.


Despite an unmistakably growing recognition, Marstrand never received the Academy's gold medal. This medal was coveted not only for its great prestige, but also because it came with a travel stipend for furthering the laureate's artistic training. Marstrand's attempts at winning the medal were unsuccessful both in 1833 with his neoclassical "Flight to Egypt" (Flugten til Ægypten) and in 1835 with "Odysseus and Nausikaa". This was a disappointment, as he had won both available silver medals in 1833.


Gold medal or not however, the Academy did award Marstrand a travel stipend. In August 1836 he began the first of his many travels, going by way of Germany to Rome in Italy, stopping on the way at Berlin, Dresden, Nuremberg and Munich. In Italy, where he stayed for four years, he painted many idealized depictions of daily life, especially festivities. He returned to Italy several times, the last visit being in 1869, and when in Rome he spent summer months each year in the hill towns Olevano Romano, Civitella and Subiaco. He was enchanted with Italy and with the ways of life of the Italian people. He portrayed a colorful, joyous, and romantic view of them, infused with a newfound ideal of beauty.