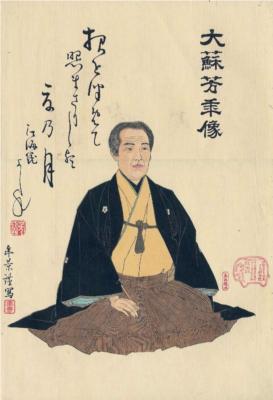 He is widely recognized as the last great master of the ukiyo-e genre of woodblock printing and painting. He is also regarded as one of the form's greatest innovators. His career spanned two eras – the last years of Edo period Japan, and the first years of modern Japan following the Meiji Restoration. Like many Japanese, Yoshitoshi was interested in new things from the rest of the world, but over time he became increasingly concerned with the loss of many aspects of traditional Japanese culture, among them traditional woodblock printing.

By the end of his career, Yoshitoshi was in an almost single-handed struggle against time and technology. As he worked on in the old manner, Japan was adopting Western mass reproduction methods like photography and lithography. Nonetheless, in a Japan that was turning away from its own past, he almost singlehandedly managed to push the traditional Japanese woodblock print to a new level, before it effectively died with him.

His life is perhaps best summed up by John Stevenson:

His reputation has only continued to grow, both in the West, and among younger Japanese, and he is now almost universally recognized as the greatest Japanese artist of his era.

Yoshitoshi was born in the Shimbashi district of old Edo, in 1839. His original name was Owariya Yonejiro. His father was a wealthy merchant who had bought his way into samurai status. At the age of three years, Yoshitoshi left home to live with his uncle, a pharmacist with no son, who was very fond of his nephew. At the age of five, he became interested in art and started to take lessons from his uncle. In 1850, when he was 11 years old, Yoshitoshi was apprenticed to Kuniyoshi, one of the great masters of the Japanese woodblock print. Kuniyoshi gave his apprentice the new artist's name "Yoshitoshi", denoting lineage in the Utagawa School. Although he was not seen as Kuniyoshi's successor during his lifetime, he is now recognized as the most important pupil of Kuniyoshi.

During his training, Yoshitoshi concentrated on refining his draftsmanship skills and copying his mentor’s sketches. Kuniyoshi emphasized drawing from real life, which was unusual in Japanese training because the artist’s goal was to capture the subject matter rather than making a literal interpretation of it. Yoshitoshi also learned the elements of western drawing techniques and perspective through studying Kuniyoshi’s collection of foreign prints and engravings.

Yoshitoshi's first print appeared in 1853, but nothing else appeared for many years, perhaps as a result of the illness of his master Kuniyoshi during his last years. Although his life was hard after Kuniyoshi's death in 1861, he did manage to produce some work, 44 prints of his being known from 1862. In the next two years he had sixty-three of his designs, mostly kabuki prints, published. He also contributed designs to the 1863 Tokaido series by Utagawa School artists organized under the auspices of Kunisada.