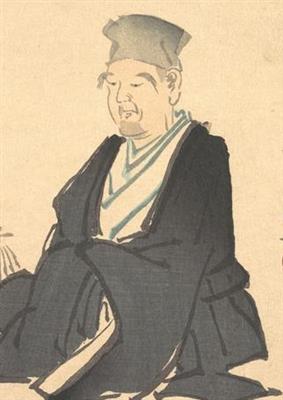 Shibata Zeshin (柴田 是真, March 15, 1807 – July 13, 1891) was a Japanese painter and lacquerer of the late Edo period and early Meiji era. In Japan, he is ironically known as both too modern, a panderer to the Westernization movement, and also an overly conservative traditionalist who did nothing to stand out from his contemporaries. Despite holding this odd reputation in Japan, Zeshin has come to be well regarded and much studied among the art world of the West, in England and the United States in particular.

Zeshin was born and raised in Edo (modern-day Tokyo). His grandfather Izumi Chobei and his father Ichigoro were shrine carpenters (miyadaiku) and skilled wood carvers. His father, who had taken his wife's family name of Shibata, was also an experienced ukiyo-e painter, having studied under Katsukawa Shunshō. This, of course, gave him an excellent start on the road to being an artist and craftsman. At age eleven, Kametaro, as Zeshin was called in his childhood, became apprenticed to a lacquerer named Koma Kansai II.

At age 13, the young man who would become Zeshin abandoned the name Kametaro and became Junzo. Koma Kansai decided that his young charge would need to learn to sketch, paint, and create original designs in order to become a great lacquerer. He arranged for young Shibata to study under Suzuki Nanrei, a great painter of the Shijō school. Shibata then took on yet another artist's name, abandoning Junzo and signing his works "Reisai," using the Rei from Suzuki Nanrei, and the sai from Koma Kansai.

It was during his time with Nanrei that he was given the name Zeshin, which he would stick with for the rest of his life. The name has a meaning similar to "this is true" or "the Truth", a reference to an old Chinese tale of a king who held an audience with a great number of painters. While nearly all of the painters afforded the king the proper respect, bowing before him and comporting themselves appropriately, one arrived half-naked, did not bow, and sat on the floor licking his paintbrush; the king exclaimed "now, this is a true artist!" And from this the name Zeshin was taken.

Zeshin learned not only the basics of painting and sketching, but also Japanese tea ceremony, haiku and waka poetry, history, literature and philosophy. This would form the foundation of his training in not only the techniques of the traditional arts, but also, and perhaps more importantly, the aesthetic and philosophy of Japanese traditional art. Many of his works from the period of his studies with Nanrei were fan paintings. The great ukiyo-e artist Utagawa Kuniyoshi was impressed with these fan paintings and, approaching the young painter, began a friendship which would last for many years.

Zeshin later studied under other great artists of the Kyoto school, including Maruyama Ōkyo, Okamoto Toyohiko, and Goshin. Though he would later be known primarily for his work with lacquers, Zeshin excelled at traditional ink painting, and produced many works of traditional subjects such as tigers and waterfalls. Though Japanese masters (sensei) are often quite egotistical and arrogant before their students, one of Zeshin's teachers is reputed to have made the comment that "just as you cannot appreciate the size of Mt. Fuji while standing upon it, so you cannot truly appreciate my skill and reputation while in Kyoto; when you return to Edo you will realize my incredible import and your great fortune in having studied under me." Zeshin, on the other hand, is reputed to have told his own students that he did not wish them to be known as "a pupil of Zeshin's, but rather as a great artist who studied under a man called Zeshin."