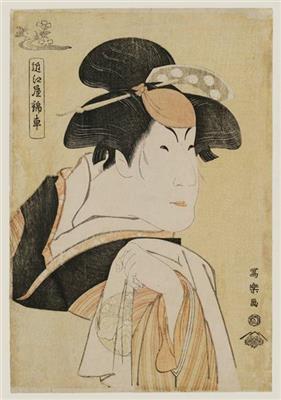 Tōshūsai Sharaku (Japanese: 東洲斎 写楽; active 1794–1795) was a Japanese ukiyo-e print designer, known for his portraits of kabuki actors. Neither his true name nor the dates of his birth or death are known. His active career as a woodblock artist spanned ten months; his prolific work met disapproval and his output came to an end as suddenly and mysteriously as it had begun. His work has come to be considered some of the greatest in the ukiyo-e genre.

Sharaku made mostly yakusha-e portraits of kabuki actors. His compositions emphasize poses of dynamism and energy, and display a realism unusual for prints of the time—contemporaries such as Utamaro represented their subjects with an idealized beauty, while Sharaku did not shy from showing unflattering details. This was not to the tastes of the public, and the enigmatic artist's production ceased in the first month of 1795. His mastery of the medium with no apparent apprenticeship has drawn much speculation, and researchers have long tried to discover his true identity—amongst the dozens of proposals, some suggest he was an obscure poet, others a Noh actor, or even the ukiyo-e master Hokusai.

Ukiyo-e art flourished in Japan during the Edo period from the 17th to 19th centuries. The artform took as its primary subjects courtesans, kabuki actors, and others associated with the ukiyo "floating world" lifestyle of the pleasure districts. Alongside paintings, mass-produced woodblock prints were a major form of the genre. Ukiyo-e art was aimed at the merchants at the bottom of the social scale, especially of the administrative capital of Edo (modern Tokyo). Its audience, themes, aesthetics, and mass-produced nature kept it from consideration as serious art.

After the mid-18th century, full-colour nishiki-e prints became common, printed with a large number of woodblocks, one for each colour. Critics have come to see the late 18th century as a peak period in the general quality of the work. Shunshō of the Katsukawa school introduced the ōkubi-e "large-headed picture" in the 1760s. He and other members of the Katsukawa school popularized ōkubi yakusha-e actor prints and the dusting of mica in the backgrounds to produce a luxurious glittering effect. In contrast to earlier actor prints, which used stereotyped features and poses of anonymous actors, these ōkubi yakusha-e aimed for recognizable likenesses.

Tōshūsai Sharaku's works appeared in the middle of the Kansei era (1789–1801), when the nation faced hard economic times that the military government responded to with reactionary policies such as the Kansei Reforms intended to strengthen the feudalistic shogunal system. Some of the policies restricted extravagant fashions, and Kabuki theatres faced strict control over their perceived excesses and limits on actors' incomes. Late Edo-period art nevertheless flourished, and new works and popular actors continued to rapidly appear in kabuki theatre, where realistic performances came in vogue. Yakusha-e came to favour a greater emphasis on the individuality of the actors, and buyers came to expect pictures with the actors' likenesses, rather than the stereotyped images of the past, such as those by the once-dominant Torii school.