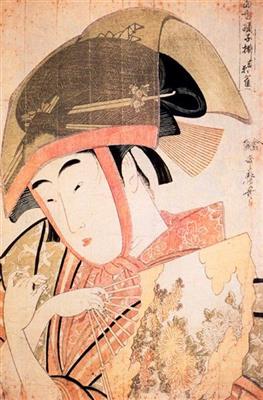 Kitagawa Utamaro (Japanese: 喜多川 歌麿; c. 1753 – 31 October 1806) was a Japanese artist. He is one of the most highly regarded designers of ukiyo-e woodblock prints and paintings, and is best known for his bijin ōkubi-e "large-headed pictures of beautiful women" of the 1790s. He also produced nature studies, particularly illustrated books of insects.

Little is known of Utamaro's life. His work began to appear in the 1770s, and he rose to prominence in the early 1790s with his portraits of beauties with exaggerated, elongated features. He produced over 2000 known prints and was one of the few ukiyo-e artists to achieve fame throughout Japan in his lifetime. In 1804 he was arrested and manacled for fifty days for making illegal prints depicting the 16th-century military ruler Toyotomi Hideyoshi, and died two years later.

Utamaro's work reached Europe in the mid-nineteenth century, where it was very popular, enjoying particular acclaim in France. He influenced the European Impressionists, particularly with his use of partial views and his emphasis on light and shade, which they imitated. The reference to the "Japanese influence" among these artists often refers to the work of Utamaro.

Ukiyo-e art flourished in Japan during the Edo period from the seventeenth to nineteenth centuries. The artform took as its primary subjects courtesans, kabuki actors, and others associated with the ukiyo "floating world" lifestyle of the pleasure districts. Alongside paintings, mass-produced woodblock prints were a major form of the genre. Ukiyo-e art was aimed at the common townspeople at the bottom of the social scale, especially of the administrative capital of Edo. Its audience, themes, aesthetics, and mass-produced nature kept it from consideration as serious art.

In the mid-eighteenth century, full-colour nishiki-e prints became common. They were printed by using a large number of woodblocks, one for each colour. Towards the close of the eighteenth century there was a peak in both quality and quantity of the work. Kiyonaga was the pre-eminent portraitist of beauties during the 1780s, and the tall, graceful beauties in his work had a great influence on Utamaro, who was to succeed him in fame. Shunshō of the Katsukawa school introduced the ōkubi-e "large-headed picture" in the 1760s. He and other members of the Katsukawa school, such as Shunkō, popularized the form for yakusha-e actor prints, and popularized the dusting of mica in the backgrounds to produce a glittering effect.

Little is known of Utamaro's life. He was born Kitagawa Ichitarō in c. 1753. As an adult, he was known by the given names Yūsuke, and later Yūki. Early accounts have given his birthplace as Kyoto, Osaka, Yoshiwara in Edo (modern Tokyo), or Kawagoe in Musashi Province (modern Saitama Prefecture); none of these places has been verified. The names of his parents are not known; it has been suggested his father may have been a Yoshiwara teahouse owner, or Toriyama Sekien, an artist who tutored him and who wrote of Utamaro playing in his garden as a child.

Apparently, Utamaro married, although little is known about his wife and there is no record of their having had children. There are, however, many prints of tender and intimate domestic scenes featuring the same woman and child over several years of the child's growth among his works.