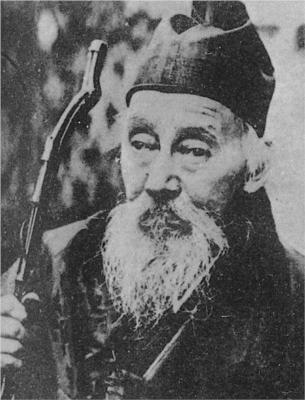 Tomioka Tessai (富岡 鉄斎, 27 January 1837 – 31 December 1924) was the pseudonym for a painter and calligrapher in imperial Japan. He is regarded as the last major artist in the Bunjinga tradition and one of the first major artists of the Nihonga style. His real name was Yusuke, which he later changed to Hyakuren.

Tessai was born in 1837 in Kyoto, as the second son of Tomioka Korenobu, who sold sacerdotal robes. Because his hearing was not good his parents decided he should be a scholar, rather than a merchant. He was educated as a scholar in classical Chinese philosophy and literature and the ancient Japanese classics under noted kokugaku scholar Okuni Tadamasa.

Tessai's father died in 1843, when he was only seven. The family fortunes declined, and young Tessai became a page at a Shinto shrine. Twelve years later, he came to be lodged with the now-famous Buddhist poet and nun Ōtagaki Rengetsu, who would become his greatest scholarly mentor and supporter. He developed his own style over the next decade or so, studying under a number of accomplished painters.

In 1861, Tessai opened a private school in Rengetsu's house to teach painting; he went on to become a teacher at the newly inaugurated Ritsumeikan University in 1868. He also did some work for the new Meiji government, contributing maps and topographical charts he created. Throughout the Meiji period, Tessai traveled extensively, visiting famous and scenic places that would later become subjects of his paintings. He was able to see many different sides of the country all the way from Nagasaki to Hokkaidō. He also served as a Shinto priest at a number of different shrines, but ultimately resigned from his final post when his brother died, so that he could look after his mother.

After Tessai settled back in Kyoto in 1882, he championed the old styles of Japanese traditional painting against the new influences of western art (yōga), then becoming more and more popular, and was thus a participant in the early nihonga movement.

Tessai's early works followed the bunjinga styles of the early 19th century, although he also worked in almost all of the styles associated with Kyoto: Rimpa, Yamato-e, Otsu-e, etc. However, his mature style concentrated on Nanga, or Chinese style paintings based on the late Ming dynasty artists from Suzhou and Jiangsu Provinces, which had been introduced to Japan by Sakaki Hyakusen. Tessai tended towards use of rich colors to portray scenes of people in landscapes, with a composition intended to evoke or illustrate a historical or literary episode. He also sometimes made use of religious imagery, combining depictions of Buddhist bodhisattva with Daoist or Confucian figures to symbolize the unity of Asian religious traditions. Tessai's final works either use very brilliant colors, or else were monochrome ink with dense, rough brushwork and occasional slight jarring touches of bright pigments.

In the 1890s, he was appointed a judge of the Young Men's Society of Painting, and became a professor at the Kyoto Fine Arts School soon afterwards. He also took part in the founding of several other art associations, including the Nanga Association of Japan. His mother died in 1895, but Tessai continued to have close relations with his family and gained a granddaughter several years later.