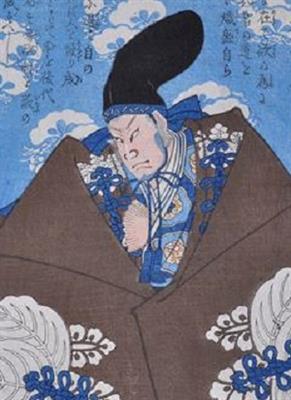 Utagawa Kunisada II (歌川国定, 1823 – 20 July 1880) was a Japanese ukiyo-e print designer, one of three to take the name "Utagawa Kunisada". He headed the Utagawa school.

Little is known of Kunisada II's early life. A pupil of Utagawa Kunisada I, he signed much of his early work "Kunimasa III". His earliest known prints date to 1844. Kunisada I adopted him in 1846 after he married the master's daughter Osuzu. He took the name Kunsada II c. 1850–51, about the time he inherited the house of Kunisada I. He changed his name once more following his master's death, to Toyokuni III. However, since there were three artists called Toyokuni before him, Kunisada II is now often known as Toyokuni IV.

Kunisada II worked in the style of his master, but never achieved the same level of success. His prints include over 40 series, mostly of actors (yakusha-e), as well portraits of beauties, illustrations of scenes from literature, erotica, and other subjects. He illustrated nearly 200 books. One of his most celebrated actor series, “The Tale of the Eight Dog Heroes” (Hakkendun inu no sōshi no uchi), dating from 1852, is drawn from Kyokutei Bakin’s epic novel, “The Satomi Clan and the Eight Dogs” (Nansō Satomi hakkenden), written from 1814-1842 and published in 106 volumes.

Kunisada II's popularity waned in the Meiji period (1868–1912), and he appears to have stopped making prints after 1874. He died on 20 July 1880 and was buried at Banshōin Kōunji. His Buddhist posthumous name is Sankōin Hōkokujutei Shinji. Students of his include Kunisada III (1848–1920).