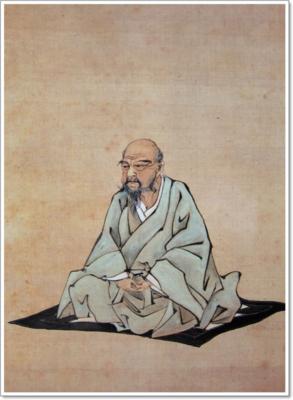 Itō Jakuchū (伊藤 若冲, 2 March 1716 – 27 October 1800) was a Japanese painter of the mid-Edo period when Japan had closed its doors to the outside world. Many of his paintings concern traditionally Japanese subjects, particularly chickens and other birds. Many of his otherwise traditional works display a great degree of experimentation with perspective, and with other very modern stylistic elements.

Compared to Soga Shōhaku and other exemplars of the mid-Edo period eccentric painters, Jakuchū is said to have been very calm, restrained, and professional. He held strong ties to Zen Buddhist ideals, and was considered a lay brother (koji); but he was also keenly aware of his role within a Kyoto society that was becoming increasingly commercial.

Itō Jakuchū was the eldest son of Itō Genzaemon, a Kyoto grocer whose shop, called Masuya, lay in the center of downtown, in the Nishiki food district. Jakuchū ran the shop from the time of his father's death in 1739 until 1755, when he turned it over to one of his brothers.

His training in paintings was mostly derived from inspirations from nature and from examining Chinese paintings at Zen temples. Some sources indicate that he may have studied with Ōoka Shunboku, an Osaka-based artist known for his bird and flower paintings. Though a number of his paintings depict exotic or fantastic creatures, such as tigers and phoenixes, it is evident from the detail and lifelike appearance of his paintings of chickens and other animals that he based his work on actual observation.

Jakuchū built a two-story studio on the west bank of the Kamo River in his late thirties. He called it Shin'en-kan (心遠館, Villa of the Detached Heart [or Mind]), after a phrase from a poem by the ancient Chinese poet Tao Qian. It was around this time that Jakuchū befriended Daiten Kenjō, a Rinzai monk who would later become abbot of the Kyoto temple Shōkoku-ji. Through this friendship Jakuchū gained access to the temple's large collection of Chinese and Japanese paintings, and gained introduction to new social and artistic circles. It is thought that Daiten may have been the one to first conceive of the name "Jakuchū", taken from the Tao Te Ching and meaning "like the void".

Well-known and well-reputed in the Kyoto art community, Jakuchū received many commissions for screen paintings, and was at one time featured above a number of other notable artists in the Record of Heian Notables (平安人物誌, Heian jinbutsu-shi). In addition to personal commissions, Jakuchū was also commissioned to paint panels or screens for many Buddhist temples and Shinto shrines across Japan, including the very famous and important Rokuon-ji (the monastery which includes the Kinkaku-ji Golden Pavilion on its grounds).

Despite his commercial successes, however, Jakuchū can definitely be said to have lived the life of a literary intellectual (bunjin). He was friends with many notable bunjin, went on journeys with them, and was influenced by their artistic styles. His own degree of experimentation was a result of a combination of this bunjin influence and his own personal creative drive. In addition to his experiments with Western materials and perspective, Jakuchū also employed on occasion a method called taku hanga (拓版画, "rubbing prints"). This method used woodblocks to resemble a Chinese technique of ink rubbings of inscribed stone slabs, and was employed by Jakuchū in a number of works, including a scroll entitled "Impromptu Pleasures Afloat" (乗興舟, Jōkyōshū), depicting a journey down the Yodo River.