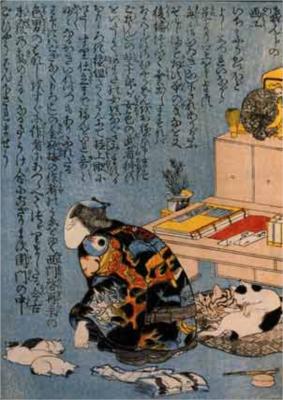 Utagawa Kuniyoshi (歌川 國芳, January 1, 1798[1] – April 14, 1861) was one of the last great masters of the Japanese ukiyo-e style of woodblock prints and painting. He was a member of the Utagawa school.

The range of Kuniyoshi's subjects included many genres: landscapes, beautiful women, Kabuki actors, cats, and mythical animals. He is known for depictions of the battles of legendary samurai heroes. His artwork incorporated aspects of Western representation in landscape painting and caricature.

Kuniyoshi was born on January 1, 1798, the son of a silk-dyer, Yanagiya Kichiyemon, originally named Yoshisaburō. Apparently he assisted his father's business as a pattern designer, and some have suggested that this experience influenced his rich use of color and textile patterns in prints. It is said that Kuniyoshi was impressed, at an early age of seven or eight, by ukiyo-e warrior prints, and by pictures of artisans and commoners (as depicted in craftsmen manuals), and it is possible these influenced his own later prints.

Yoshisaburō proved his drawing talents at age 12, quickly attracting the attention of the famous ukiyo-e print master Utagawa Toyokuni. He was officially admitted to Toyokuni's studio in 1811, and became one of his chief pupils. He remained an apprentice until 1814, at which time he was given the name "Kuniyoshi" and set out as an independent artist. During this year he produced his first published work, the illustrations for the kusazōshi gōkan Gobuji Chūshingura, a parody of the original Chūshingura story. Between 1815 and 1817 he created a number of book illustrations for yomihon, kokkeibon, gōkan and hanashibon, and printed his stand-alone full color prints of "kabuki" actors and warriors.

Despite his promising debut, the young Kuniyoshi failed to produce many works between 1818 and 1827, probably due to a lack of commissions from publishers, and the competition of other artists within the Utagawa school (Utagawa-ryū). However, during this time he did produce pictures of beautiful women ('bijin-ga') and experimented with large textile patterns and light-and-shadow effects found in Western art, although his attempts showed more imitation than real understanding of these principles.

His economic situation turned desperate at one point when he was forced to sell used tatami mats. A chance encounter with his prosperous fellow pupil Kunisada, to whom he felt (with some justice) that he was superior in artistic talent, led him to redouble his efforts (but did not create any lingering ill-feeling between the two, who later collaborated on a number of series).

During the 1820s, Kuniyoshi produced a number of heroic triptychs that show the first signs of an individual style. In 1827 he received his first major commission for the series, One hundred and eight heroes of the popular Suikoden all told (Tūszoku Suikoden gōketsu hyakuhachinin no hitori), based on the incredibly popular Chinese tale, the Shuihu Zhuan. In this series Kuniyoshi illustrated individual heroes on single-sheets, drawing tattoos on his heroes, a novelty which soon influenced Edo fashion. The Suikoden series became extremely popular in Edo, and the demand for Kuniyoshi’s warrior prints increased, gaining him entrance into the major ukiyo-e and literary circles.