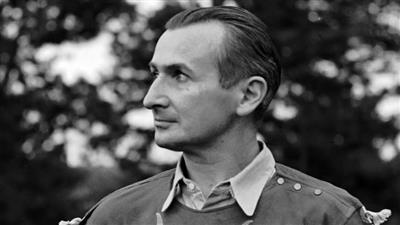 Stanisław Szukalski (13 December 1893 – 19 May 1987) was a Polish-born American sculptor and painter who became a part of the Chicago Renaissance. In 1930s Poland he enjoyed fame as a nationalist sculptor. He also developed the pseudoscientific-historical theory of Zermatism, positing that all human culture was derived from post-deluge Easter Island and that humankind was locked in an eternal struggle with the Sons of Yeti ("Yetinsyny"), the offspring of Yeti and humans.


Szukalski was born in Warta, Poland, and was raised in Gidle, a nearby village. He arrived at New York with his mother, Konstancja, and sister, Alfreda, on June 27, 1907; they then went to Chicago to join his father, Dyonizy Szukalski, a blacksmith. A child prodigy in sculpture, he enrolled at age 13 at the Art Institute of Chicago. A year later, Sculptor Antoni Popiel persuaded Szukalski’s parents to send him back to Poland, to enroll at Kraków’s Academy of Fine Arts in 1910. There he studied sculpture under Konstanty Laszczka for three years. He returned to Chicago in 1913.


Back in the U.S., Szukalski joined the arts scene in Chicago, becoming a vital part of the "Chicago Renaissance." In November 1914, he exhibited seven of his sculptures at the Annual Exhibition of American Oil Paintings and Sculpture in the Art Institute’s galleries. He had two solo exhibitions at the Art Institute, in 1916 and 1917, as well as one at the progressive Arts Club in 1919; he also exhibited regularly in the juried annuals at the Art Institute. In 1922, he married Helen Walker, the artist daughter of Dr. Samuel J. Walker, a prominent member of Chicago society.


The first design proposed for a monument of Adam Mickiewicz, a Polish hero, to be built in the city of Vilnius, was promoted by Zbigniew Pronaszko of Vilnius University (then, Stefan Batory University in the Second Polish Republic). However, in May 1925, a contest was declared for the design of the monument. The period for submitting designs was extended a number of times, with 67 designs ultimately submitted. The jury consisted of Vilnius's municipal authorities and representatives of the arts scene, with General Lucjan Żeligowski at the helm.


Szukalski won first prize in the contest. His design for the monument showed Mickiewicz, naked, lying upon a sacrificial altar. The sculpture was to be situated on a large pedestal in the shape of an Aztec pyramid. A White Eagle, Poland's national symbol, was perched at the figure's side, where it symbolically drank blood from the poet's wound.


Szukalski's design was highly divisive among Poland's intelligentsia, leadership, and art critics, as well as ordinary individuals. The polarized atmosphere led the monument committee to arrange for a new contest, this time limited to concepts by artists who were invited to participate. The winner was Henryk Kuna, whose proposal was then chosen to be built. However, due to a number of problems involving financing as well as a suitable location, the monument's construction dragged on. With the outbreak of World War II and the incorporation of Vilnius into Lithuania, the project was abandoned.