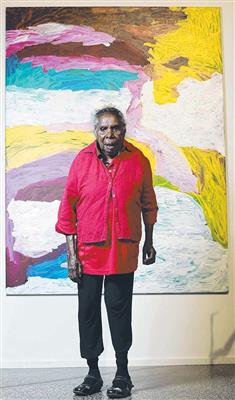 Mirdidingkingathi Juwarnda Sally Gabori (born c. 1924) was an Indigenous Australian artist who at age 81 began painting in an abstract-like style she developed to represent her country.


Gabori was born at Mirdidingki on the south side of Bentinck Island, the largest island in the South Wellesley Group in the southern Gulf of Carpentaria, Queensland, Australia. As a young woman she lived a traditional lifestyle on Bentinck Island, largely uninfluenced by Europeans. She gathered food, including shellfish, from the complex system of stone fish traps her people had built in the shallows around the island. She helped to build and maintain the stone walls of the fish traps, was an adept maker of string, and weaver of dillybags and coolamons, and a respected singer of Kaiadilt songs, which tell of the close ties her people had with their country.


Gabori's tribal name is Mirdidingkingathi Juwarnda. Juwarnda means 'dolphin', her totemic sign, and Mirdidingkingathi means 'born at Mirdidingki', in her country on the south side of Bentinck Island. The English name Gabori comes from her husband Pat Gabori, and is a corruption of his birthplace name, Kabararrjingathi.


Severe drought in 1942–45 and a cyclone in 1948 made Bentinck Island uninhabitable, and Presbyterian missionaries moved the entire Kaiadilt people to nearby Mornington Island.A small outstation was established on Bentinck Island in 1986 and some Kaiadilt people returned. Gabori did not return with them because her husband was too frail, but was able to visit occasionally.


In 2005, when she was 81, Sally and Pat Gabori were living in the Aged Person Hostel at Gununa on Mornington Island. Brett Evans had established the Mornington Island Arts and Crafts Centre to produce and market traditional crafts, including Gabori's fine weaving. She was offered paints for the first time at a workshop in April 2005. The Kaiadilt community had no two-dimensional art traditions before 2005, so Gabori had nothing to draw on but her memory of her country.


When Indigenous artist Melville Escott looked at Gabori's first painting, he could identify "the river, sandbar, ripples the fish leave on the water, her brother King Alfred's country and the fish traps she used to look after". Her enthusiasm for painting grew until she was painting five days a week, every day the centre was open.


Towards the end of her career, Gabori painted collaborative works with two of her daughters, and encouraged her other daughters into the art centre, to help develop a new generation of Kaiadilt painters. Over the short eight years of her painting career, she produced over 2000 paintings, and almost all major institutions in Australia acquired her works. Gabori's work has featured in over 28 solo exhibitions and been part of more than 100 group exhibitions.