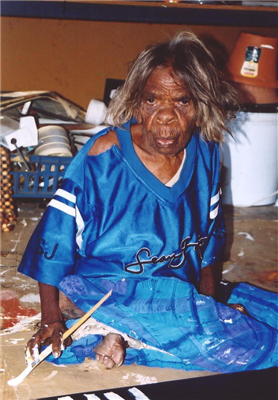 
Makinti Napanangka (c. 1930 – 9 January 2011) was a Pintupi-speaking Indigenous Australian artist from Australia's Western Desert region. She was referred to posthumously as Kumentje. The term Kumentje was used instead of her personal name as it is customary among many indigenous communities not to refer to deceased people by their original given names for some time after their deaths. She lived in the communities of Haasts Bluff, Papunya, and later at Kintore, about 50 kilometres (31 mi) north-east of the Lake MacDonald region where she was born, on the border of the Northern Territory and Western Australia.


Makinti Napanangka began painting Contemporary Indigenous Australian art at Kintore in the mid-1990s, encouraged by a community art project. Interest in her work developed quickly, and she is now represented in most significant Australian public art galleries, including the National Gallery of Australia. A finalist in the 2003 Clemenger Contemporary Art Award, Makinti won the National Aboriginal & Torres Strait Islander Art Award in 2008. Her work was shown in the major indigenous art exhibition Papunya Tula: Genesis and Genius, at the Art Gallery of New South Wales.


Working in synthetic polymer on linen or canvas, Makinti's paintings primarily take as their subjects a rockhole site, Lupul, and an indigenous story (or "dreaming") about two sisters, known as Kungka Kutjarra. She was a member of the Papunya Tula Artists Cooperative, but her work has been described as more spontaneous than that of her fellow Papunya Tula artists.


Makinti Napanangka's year of birth is uncertain, but several sources indicate she was born around 1930, although other sources indicate she may have been born as early as 1922 or as late as 1932 at a location described by some sources as Lupul rockhole but by one major reference work as Mangarri. All sources agree that she comes from the area of Karrkurritinytja or Lake MacDonald, which straddles the border between Western Australia and the Northern Territory, 50 kilometres (31 mi) south-west of Kintore, and about 500 kilometres (310 mi) west of Alice Springs.


Makinti was a member of the Pintupi group of indigenous people, who are associated with the communities of Papunya, Kintore, and Kiwirrkura. "Napanangka" is a skin name, one of eight used to denote the subgroups in the Pintupi kinship system, not a surname in the sense used by Europeans. Thus her personal name was "Makinti". The uncertainty around Makinti's date and place of birth arises from the fact that Indigenous Australians often estimate dates of birth by comparison with other events, especially for people born before contact with European Australians. They may also cite the place of birth as being where the mother first felt the foetus move, rather than where the birth took place.


Makinti's first contact with white people was seeing them riding camels, when she was living at Lupul. She was one of a large group of people who walked into Haasts Bluff in the early 1940s, together with her husband Nyukuti Tjupurrula (brother of artist Nosepeg Tjupurrula), and their son Ginger Tjakamarra, born around 1940. At Haasts Bluff they had a second child, Narrabri Narrapayi, in 1949. The population moved to Papunya in the late 1950s, where Makinti had another child, Jacqueline Daaru, in 1958. She had a daughter, Winnie Bernadette, in 1961 in Alice Springs. The family moved to Kintore when it was established in the early 1980s, and by 1996 Kumentje was painting there for the Papunya Tula Artists Cooperative. Her children Ginger, Narrabri, and Jacqueline also became artists, all of them painting for Papunya Tula Artists.