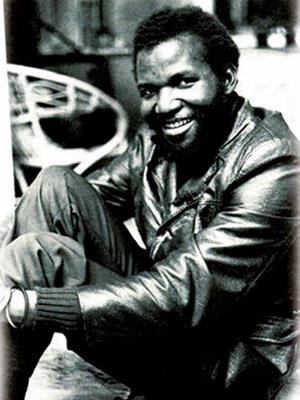 Although he produced a number of tapestries and paintings while at Rorke’s Drift, Muafangejo is known almost entirely as a printmaker; his linocuts are also particularly well known. In this respect, Azaria Mbatha (qv.), who favoured the medium, influenced Muafangejo as did many other artists who studied at Rorke’s Drift. In addition, the relative inexpensiveness of the medium and the fact that it does not require sophisticated printing equipment made it an attractive and feasible option for many black printmakers. But, like many others, when Muafangejo had access to the necessary equipment and materials, he produced an impressive body of woodcuts and intaglio prints. In intaglio, he seldom used etching on its own, preferring to combine it with aquatint (for tonal areas) and he was particularly adept in the use of drypoint – where the image is scratched directly into the plate. The immediacy and vividness of drypoint proved a sympathetic medium for his images.

In his prints Muafangejo used a clear and unambiguous language – he could literally and figuratively tell a story in black-and-white, and there is always a strong narrative component in his work. Characteristically, a dramatic incident often forms the subject of his prints with the ‘characters’ in the story dispersed over the sheet, occupying a shallow space. This narrative is often extended, with text incorporated into the print. Text at times becomes so important that the print resembles a page from a medieval illuminated manuscript.

Some commentators have seen Muafangejo as ‘naïve’ and ‘primitive’ – but this is far from true. He, in fact, produced work which comments with subtlety and insight on the world around him. Although direct references to contemporary political events are rare, his work does refer – if obliquely – to the repressive regime at the time, and he often used Zulu and Ovambo history to provide an indirect comment in this regard. Religious subjects feature prominently in his work, reflecting his strong religious background. But, even here, Muafangejo also commented on the political and social role of the Church in resisting and opposing an inhumane and unjust regime.

Many of his prints are of an autobiographical nature and refer to dramatic or humorous incidents in his life. But the references to his personal life are mediated by a gentle humour and an objectivity which transcends the merely anecdotal. The lucky artist, a linocut of 1974, (plate 180) was conceived after the announcement on Radio Owambo that Muafangejo had won a silver cup for an exhibition. Muafangejo did not know for which exhibition he had won the award, but decided to celebrate by making this print. This was just as well, for in the end, he did not receive a cup at all! Although very disappointed, Muafangejo, typically, does not show this in his print. In a relatively short working career he produced an impressive body of work which has influenced generations of printmakers in Southern Africa.


Muafangejo came from the people of Kwanyama (Kuanjama), who inhabit the northern parts of Ovamboland. As a child, he tended cattle barefoot. 1955 his father died, leaving his mother, who was one of eight wives, with no assets. His mother converted to Christianity and moved in 1956 to the Anglican mission station in Epinga which lay south of the border in Namibia. In 1957 John followed her there and attended the local missionary school.


At twenty Muafangejo moved to the Holy Cross School of Mission in Onamunhama, then to the St Mary's School in Odibo. He stayed there until 1967. An American missionary named C. S. Mallory supported his artistic talent and helped him with the application to the Arts and Craft Centre of the Evangelical Lutheran Church in Rorke's Drift, Natal in South Africa. The Rorke's Drift Art and Craft Centre was founded in 1962 by the Swedish couple Ulla and Peder Gowenius and played a significant role in the development of South African art in the second half of the 20th century. Here Muafangejo came into contact with different artistic techniques, such as the weaving, woodcarving, painting and pottery. One of his teachers was Azaria Mbatha (b. 1941). He distinguished himself particularly in etching and linocut. In 1968 he suffered a nervous breakdown and was in treatment in the Madadeni Hospital in Newcastle due to a severe depression. After his release he acquired a degree from Rorke's Drift in 1969. From 1970 to the end of 1974 he worked as an art teacher at the mission school in Odibo. In 1974 he was awarded the Artist-in-residence scholarship in Rorke's Drift. In 1975 he returned to Odibo, and in 1977 moved to Windhoek. During 1986–1987 he built a house in the suburb of Katutura. He died suddenly of a heart attack on 27 November 1987.


John Muafangejo was considered the most important visual artist of his country. His linocuts are powerful depictions of people and events, expressed in black and white imagery, condensing the colourful landscapes and animal images of Namibia's artists of European origin.


He often combines text with images, and his images contain references to the history and culture of the ovaKwanyama. He did not live to see the independence of Namibia, but the violent struggle for it formed the background for his art.


Muafangejo’s output contains only ca. 260 different prints. The Namibian Arts Association in Windhoek has a large collection of his works in their Permanent Collection.


Orde, Forcible Love, A play about John Muafangejo presented at the National Theatre of Namibia for Independence Celebrations March, 1990


John Muafangejo Trust, c/o DACS, for the estate of the artist.