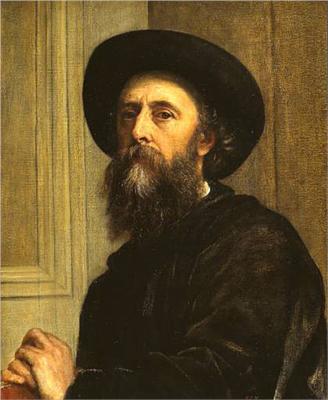 George Frederic Watts, OM, RA (London 23 February 1817 – 1 July 1904) was an English Victorian painter and sculptor associated with the Symbolist movement. He said "I paint ideas, not things." Watts became famous in his lifetime for his allegorical works, such as Hope and Love and Life. These paintings were intended to form part of an epic symbolic cycle called the "House of Life", in which the emotions and aspirations of life would all be represented in a universal symbolic language.

Watts was born in Marylebone, London on the birthday of George Frederic Handel (after whom he was named), to the second wife of a poor piano-maker. Delicate in health and with his mother dying while he was still young, he was home-schooled by his father in a conservative interpretation of Christianity as well as via the classics such as the Iliad. The former put him off conventional religion for life, while the latter was a continual influence on his art. He showed artistic promise very early, learning sculpture from the age of 10 with William Behnes, starting to devotedly study the Elgin Marbles (later writing "It was from them alone that I learned") and then enrolling as a student at the Royal Academy at the age of 18. He first exhibited at the Academy in 1837. He also began his portraiture career, receiving patronage from his close contemporary Alexander Constantine Ionides, who later came to be a close friend.

He came to the public eye with a drawing entitled Caractacus, which was entered for a competition to design murals for the new Houses of Parliament at Westminster in 1843. Watts won a first prize in the competition, which was intended to promote narrative paintings on patriotic subjects, appropriate to the nation's legislature. In the end Watts made little contribution to the Westminster decorations, but from it he conceived his vision of a building covered with murals representing the spiritual and social evolution of humanity.

The prize from the Westminster competition did, however, fund a long visit to Italy from 1843 onwards, where Watts stayed and became friends with the British ambassador Henry Fox, 4th Baron Holland and his wife Augusta at their homes in Casa Feroni and the Villa Careggi. Also while in Italy Watts began producing landscapes and was inspired by Michelangelo's Sistine Chapel and Giotto's Scrovegni Chapel. In 1847, while still in Italy, Watts entered a new competition for the Houses of Parliament with his image of Alfred the Great, Alfred Inciting the Saxons to Prevent the Landing of the Danes by Encountering them at Sea, on a patriotic subject but using Phidean inspiration. Leaving Florence in April 1847 for what was intended to be a brief return to London, he ended up staying. Back in Britain he was unable to obtain a building in which to carry out his plan of a grand fresco based on his Italian experiences, though he did produce a 45 ft by 40 ft fresco on the upper part of the east wall of the Great Hall of Lincoln's Inn entitled Justice, A Hemicycle of Lawgivers (completed 1859), inspired by Raphael's The School of Athens. In consequence most of his major works are conventional oil paintings, some of which were intended as studies for the House of Life.