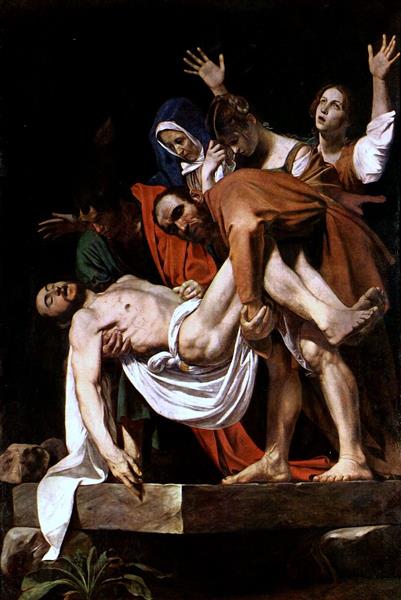 Caravaggio created one of his most admired altarpieces, The Entombment of Christ, in 1603–1604 for the second chapel on the right in Santa Maria in Vallicella (the Chiesa Nuova), a church built for the Oratory of Saint Philip Neri. A copy of the painting is now in the chapel, and the original is in the Vatican Pinacoteca. The painting has been copied by artists as diverse as Rubens, Fragonard, Géricault and Cézanne.

On 11 July 1575, Pope Gregory XIII (1572-1585) issued a bull confirming the formation of a new society called the Oratory and granting it the church of Santa Maria in Vallicella. Two months after the bull, the rebuilding of the church commenced. Envisaged in the planned reconstruction of the Chiesa Nuova (new church), as it became known, was the dedication of all the altars to the mysteries of the Virgin. Starting in the left transept and continuing around the five chapels on either side of the nave to the right transept, the altars are dedicated to the Presentation of the Temple, the Annunciation, the Visitation, the Nativity, the Adoration of the Shepherds, the Circumcision, the Crucifixion, the Pietà, the Resurrection, the Ascension, the Descent of the Holy Ghost, the Assumption and the Coronation.

The Entombment was probably planned and begun in 1602/3. The chapel in which the Entombment was to be hung, was dedicated to the Pietà, and was founded by Pietro Vittrice, a friend of Pope Gregory XIII and close follower of Filippo Neri. The Capella della Pietà occupied a 'privileged' position in the Chiesa Nuova: Mass could be celebrated from it and it was granted special indulgences.

The chapel, placed in the right nave of the Chiesa Nuova, was conceded to Vittrice in June 1577, and the foundation of the chapel ratified in September 1580. Some time after his death in March 1600, a legacy of 1,000 scudi became available for the maintenance of the chapel, and it was built in 1602, which is then held to be the earliest date for the commission of Caravaggio's painting. Indeed, on 1 September 1604, it is described as 'new' in a document recording that it had been paid for by Girolamo Vittrice, Pietro's nephew and heir.

Girolamo Vittrice had a direct connection with Caravaggio: in August 1586 he married Orinzia di Lucio Orsi, the sister of Caravaggio's friend Prospero Orsi and the niece of the humanist Aurelio Orsi. Aurelio, in turn, was a one-time mentor to the young Maffeo Barberini, who became Pope Urban VIII in 1623. It is through these connections that Girolamo's son, Alessandro, became bishop of Alatri in 1632, and was able to bestow the gift of Caravaggio's Fortune Teller (now in the Louvre) on Pope Innocent X Pamphilij after being appointed governor of Rome in 1647.

The painting was universally admired and written about by such critics as Giulio Mancini, Giovanni Baglione (1642), Gian Pietro Bellori (1672) and Francesco Scanelli (1657).

The painting was taken to Paris in 1797 for the Musée Napoléon, returned to Rome and installed in the Vatican in 1816.