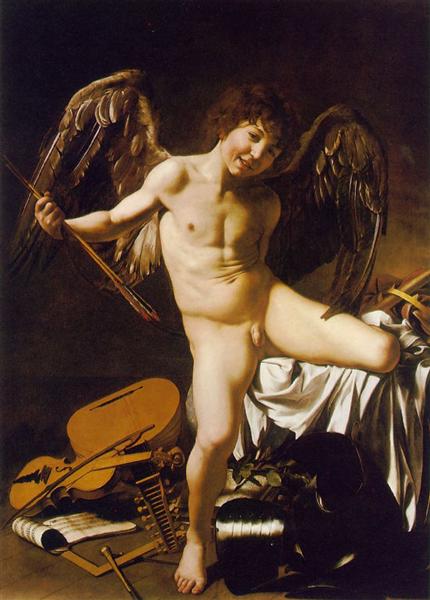 Cupid, the god of love stand upon the trampled symbols of music, science, war, and government, illustrating Virgil’s line: “love conquers all; let us all yield to love!” Caravaggio’s depiction of Cupid, rather than the cherub-like, idealized boy, is realistic, from the crooked grin to the tousled head of hair. The painting was commissioned by a rich patron Vincenzo Guistanini, who retained it in his possession and reportedly loved it above all others. The painting was an immediate success, and inspired contemporary artworks, including poems and epigrams along the same theme.

Amor Vincit Omnia shows Amor, the Roman Cupid, wearing dark eagle wings, half-sitting on or perhaps climbing down from what appears to be a table. Scattered around are the emblems of all human endeavours – violin and lute, armour, coronet, square and compasses, pen and manuscript, bay leaves, and flower, tangled and trampled under Cupid’s foot. The painting illustrates the line from Virgil's Eclogues X.69, Omnia vincit amor et nos cedamus amori ("Love conquers all; let us all yield to love!"). A musical manuscript on the floor shows a large "V". It has therefore been suggested also that the picture is a coded reference to the attainments of Marchese Vincenzo Giustiniani: his Genoese family ruled Chios (until the island's capture by the Turks) in 1622, hence the coronet; the cultivated Marchese also wrote about music and painting (pen, manuscript and musical instruments), was constructing an imposing new palazzo (geometrical instruments), studied astronomy (astral sphere), and was praised for his military prowess (armour). The symbology thus holds the possible reading: Vincenzo Conquers All. Giustiniani is said to have prized it above all other works in his collection.

The subject was common for the age. Caravaggio’s treatment is remarkable for the realism of his Cupid – where other depictions, such as a contemporary Sleeping Cupid by Battistello Caracciolo, show an idealised, almost generic, beautiful boy, Caravaggio’s Cupid is highly individual, charming but not at all beautiful, all crooked teeth and crooked grin: one feels that one would recognise him in the street. The shock of the Caravaggio, quite apart from the dramatic chiaroscuro lighting and the photographic clarity, is the mingling of the allegorical and the real, this sense it gives of a child who is having a thoroughly good time dressing up in stage-prop wings with a bunch of arrows and having his picture painted. Nevertheless, despite the clear indications of Caravaggio’s practice of painting direct from a live model, there is an undeniable resemblance to the pose of Michelangelo's Victory now in the Palazzo Vecchio, Florence, and it is likely the artist had this in mind.

The painter Orazio Gentileschi lent Caravaggio the wings as props to be used in the painting, and this allows fairly precise dating of 1602–3. It was an immediate success in the circles of Rome’s intellectual and cultural elite. A poet immediately wrote three madrigals about it, and another wrote a Latin epigram in which it was first coupled with the Virgilian phrase Omnia Vincit Amor, although this did not become its title until the critic Giovanni Pietro Bellori wrote his life of Caravaggio in 1672.

Inevitably, much scholarly and non-scholarly ink has been spilled over the alleged eroticism of the painting. Yet the homoerotic content was perhaps not so apparent to Giustiniani’s generation as it has become today. Naked boys could be seen on any riverbank or seashore, and the eroticisation of children is very much a cultural artefact of the present-day rather than Caravaggio's. The story that the Marchese kept Amor hidden behind a curtain relates to his reported wish that it should be kept as a final pièce de résistance for visitors, to be seen only when the rest of the collection had been viewed – in other words, the curtain was to reveal the painting, not to hide it. (According to the historian Joachim von Sandrart, who catalogued the Giustiniani collection in the 1630s, the curtain was only installed at his urging at that time). The challenge is to see the Amor Vincit through 17th century eyes.