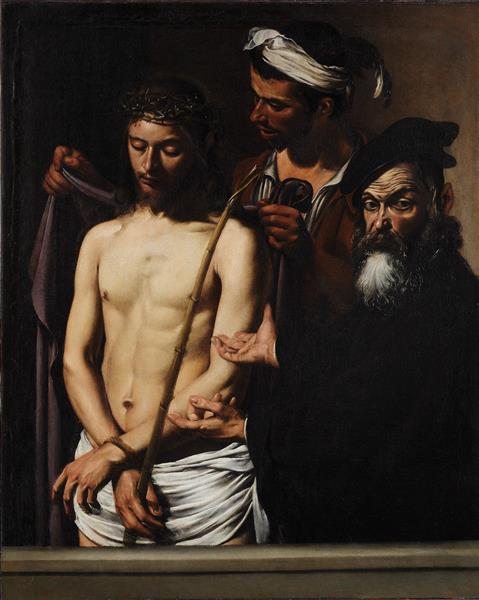 Ecce Homo (c. 1605/6 or 1609 according to John Gash) is a painting by the Italian master Caravaggio. It is housed in the Palazzo Bianco, Genoa. According to Giambatista Cardi, nephew of the Florentine artist Cigoli, Cardinal Massimo Massimi commissioned paintings on the theme of Ecce Homo from three artists, Cigoli, Caravaggio, and Domenico Passignano, without informing the artists of the multiple commissions. Cardi claimed the cardinal liked Cigoli's version best.

The scene is taken from the Gospel of (John 19): Pontius Pilate displays Christ to the crowd with the words, "Ecce homo!" ("Behold the man"). Caravaggio's version of the scene combined Pilate's display with the earlier moment of Christ, already crowned with thorns, mockingly robed like a king by his tormentors. Massimi already possessed a Crowning with Thorns, by Caravaggio, and Ecce Homo may have been intended as a companion piece. Stylistically, the painting displays characteristics of Caravaggio's mature Roman-period style. The forms are visible close-up and modelled by dramatic light, the absence of depth or background, and the psychological realism of, the torturer, who seems to mix sadism with pity. Pilate, in keeping with tradition, is shown as a rather neutral and perhaps almost sympathetic figure.

The contract for Ecce Homo was signed on 25 June 1605, with the painting to be delivered in August. Whether Caravaggio met his deadline is uncertain, as by July he was arrested for attacking the house of Laura della Vecchia and her daughter, Isabella. Friends stood bail for him, but on 29 July he was in far more serious trouble for assaulting the notary Mariano Pasqualone over a well-known courtesan Lena and Caravaggio's model who is referred to by Pasqualone in the police complaint as "Michelangelo's (i.e. Caravaggio's) girl". Consequently, Caravaggio fled to Genoa until the end of August. He continued to be in trouble with the law throughout the year, with a complaint against him in September for throwing stones at his landlady's house, and a mysterious incident in October in which he was wounded in the throat and ear (Caravaggio claimed he had fallen on his own sword). In May 1606 he fled Rome again after killing Ranuccio Tomassoni in a duel, and he was not settled in Naples until the latter part of that year. Cigoli's Ecce Homo was not painted until 1607, and clearly attempts to mimic Caravaggio's style, suggesting that Massimi had not yet received his Caravaggio and was turning elsewhere. It is instructive to compare the two paintings: Caravaggio, unlike Cigoli, has dropped the convention of showing Christ's torturer as a grotesque, and has shown Pilate dressed as a 17th-century official.

Several scholars, such as Sebastian Schutze dispute the attribution of this work to Caravaggio, with Schutze noting that "the composition seems extremely cramped, and it's narrative structure strangely fractured. The Roman governor seems to belong to a quite different plane of reality; he appears like the donor figure in an altarpiece and is painted in a different manner, with his facial features exaggerated almost to the point of caricature."