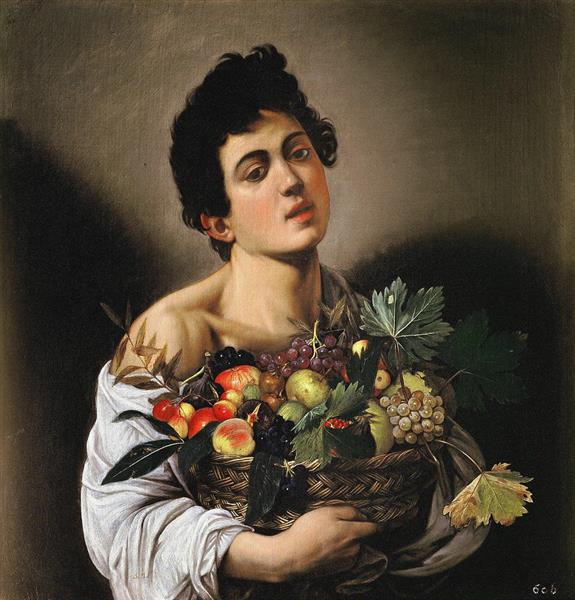 Boy with a Basket of Fruit

Caravaggio completed this painting when he was new to Rome and relatively unknown in the art world. The model for the boy in painting was Caravaggio’s good friend Mario Minniti, who was 16 at the time, and who would serve as one of his models many times in the future. As a realist painter, Caravaggio did not idealize his paintings, instead he captured the very essence of what he saw on the canvas in front of him. This is beautifully clear in his portrayals of the fruit and leaves in the basket, which are so realistic that they have been analyzed by horticultural scientists, who were able to accurately determine the individual cultivars.

Boy with a Basket of Fruit, c.1593, is a painting generally ascribed to Italian Baroque master Michelangelo Merisi da Caravaggio, currently in the Galleria Borghese, Rome.

The painting dates from the time when Caravaggio, newly arrived in Rome from his native Milan, was making his way in the competitive Roman art world. The model was his friend and companion, the Sicilian painter Mario Minniti, at about 16 years old. The work was in the collection of Giuseppe Cesari, the Cavaliere d'Arpino, seized by Cardinal Scipione Borghese in 1607, and may therefore date to the period when Caravaggio worked for d'Arpino "painting flowers and fruits" in his workshop; but it may date from a slightly later period when Caravaggio and Minniti had left Cavalier d'Arpino's workshop (January 1594) to make their own way selling paintings through the dealer Costantino. Certainly it cannot predate 1593, the year Minniti arrived in Rome. It is believed to predate more complex works from the same period (also featuring Minniti as a model) such as The Fortune Teller and the Cardsharps (both 1594), the latter of which brought Caravaggio to the attention of his first important patron, Cardinal Francesco Maria Del Monte. Vittorio Sgarbi notes certain Murillesque portraiture qualities in the painting that could easily point to other painters in the Arpino workshop.

At one level the painting is a genre piece designed to demonstrate the artist's ability to depict everything from the skin of the boy to the skin of a peach, from the folds of the robe to the weave of the basket. The fruit is especially exquisite, and Professor Jules Janick of the Department of Horticulture and Landscape Architecture at Purdue University, Indiana, has analysed them from a horticulturalist's perspective:

The analysis indicates that Caravaggio is being realistic, in capturing only what was in the fruit basket; he idealizes neither their ripeness nor their arrangement—yet almost miraculously, we are still drawn in to look at it; for the viewer it is very much a beautiful and exquisite subject.