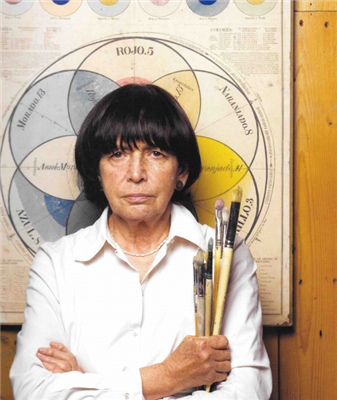 Beatriz González (born 1938) is a Colombian painter, sculptor, critic, curator and art historian. González is often associated with the Pop Art movement. She is best known for her bright and colorful paintings depicting life in Colombia during the war-torn period known as La Violencia.


Beatriz González was born in Bucaramanga, Colombia in 1938. She is the youngest daughter of Valentín González Rangel and Clementina Aranda Mantilla. In the late 1950s, she enrolled in architecture school, but she dropped out only a few years later. She returned to Bucaramanga in 1958. González ended up enrolling in University of Los Andes (Colombia), graduating from their fine arts department in 1962. While there, she was a student of Argentine art critic and historian Marta Traba and Spanish painter Joan Antonio Roda.


González grew up in Colombia during the 1940s and 50s, while the country was plagued with violence and war due to the social and political upheaval known as La Violencia. Growing up during this time largely influenced González's understanding of Colombia society, and eventually even her artistic style.


Although González is often referred to as an artist of the pop art movement, she has never considered herself a pop artist. She often thought that the pop movement was not present in her preferred medium of painting and that it wouldn't be an appropriate label for the work she was doing. When asked if she had at any point considered herself a pop artist she responded with, "I’ve always considered myself more of a painter and within this remit I painted the joy of the underdeveloped. For me the type of art that I was doing could only circulate internationally as a curiosity. Mine was a provincial type of art without horizons, confronting the everyday: art is international."


She has oftentimes been acknowledged for being a woman in a movement and country where a great deal of her peers were men, according to González, this has never been a problem for her and credits Marta Traba for encouraging the presence of woman in the Colombian art scene and states that she doesn't believe in the complex of the female artist who must be victimized.


In 1965 González created a painting entitled The Suicides of Sisga, the painting was based on a picture of a young couple that had been published in a local newspaper after they jumped off the dam of the river Sisga in order to preserve the purity of their love. This work was initially refused at the 1965 Salon of Colombian Artists, disregarded and brushed off by the Jury as a "bad Botero". After one of González's friends and mentors, Marta Traba pressed the Jury to reconsider their decision, the painting was not only accepted, but Gonzáles won a special prize for her work, that eventually helped launch her career.


After accompanying her husband who is an architect to a hardware store in the 1970s, she began her work on various pieces of store-bought furniture that would generally be found in middle-class households earlier in the century. Typically she would take her images from well known Italian Renaissance and history paintings, or pictures from the present day news media, transferring these images onto cheap nightstands, chairs, coffee tables and beds painted by an amateur painter. She carefully coordinated her images with the furniture's function, such as painting the popes face on nightstands, conjuring up devotional images commonly found over beds or on nightstands in the average Colombian household.