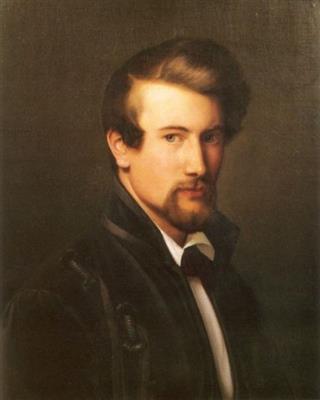 Adolph Tidemand (14 August 1814 – 8 August 1876) was a noted Norwegian romantic nationalism painter. Among his best known paintings are Haugianerne (The Haugeans; 1852) and Brudeferd i Hardanger (The Bridal Procession in Hardanger; 1848), painted in collaboration with Hans Gude.


Adolph Tidemand was born in Mandal, Norway as the son of customs inspector and Storting representative Christen Tidemand (1779–1838) and Johanne Henriette Henrikke Haste (1779–1859). He received private art lessons in his home town and his talent was soon recognized. He then was enrolled in an art school in Christiania, moving on to Copenhagen in the period 1832–1837. Upon arrival in Copenhagen, he was rejected by the Royal Danish Academy of Fine Arts and studied at a private school of art, but by 1833 he was a pupil at the Academy, earning Academy exhibitions in 1835 and 1836. He studied there for five years and then began a journey to Italy to study further. But when Tidemand came to Düsseldorf, Germany, he liked it so much that he settled down there.


From 1837 until 1841 he continued his studies at the art academy in Düsseldorf, which at the time enjoyed widespread international recognition. He studied with and was influenced by his teacher, Theodor Hildebrandt. Here he prepared the well known Hjemvendte fiskere ved den sjællandske kyst (1838). The painting Gustav Vasa taler til dalalmuen i Mora kirke (1841) was sold to a German museum, but was later returned to Christiania. He is associated with the Düsseldorf school of painting.


In the autumn of 1841 he studied in Italy along with his brother Emil. Few of his works from this period remain, except for the picture Napolitansk fisker (1842). Tidemand was preoccupied by Norwegian history, particularly after returning on a journey to Norway. During a journey to 1843 in Hardanger, he met the 18-year-old Hans Gude. This resulted in a close friendship, and eventually they collaborated on several landscape paintings in which Tidemand painted the figures.


During 1842–1845 he traveled extensively in Norway (to Østerdalen, Gudbrandsdalen, Sogn, Hardanger and Telemark). More of his works survive from this period, including Eventyrfortellersken (1844), Søndagskveld i en hardangersk røkstue (1843) and Gudstjeneste i en norsk landsens kirke (1845). In his later travels in southern Norway, the last in 1875, Tidemand studied folk costumes, domestic utensils and building and made himself familiar with oral traditions, folk tales and legends. His version of rusticity proved highly popular and in 1848 he was commissioned by Oscar I, King of Sweden and Norway, to paint a series of Norwegian peasant life for the royal palace of Oscarshall, near Christiania.


Today Adolph Tidemand is best known for this depiction of Norwegian farm and culture and is counted among the first Norwegian historic painters. In Tidemand's paintings of the old Norwegian farm culture, he portrayed the peasant with a new dignity, humane and culturally. The National Museum of Art, Architecture and Design (Nasjonalgalleriet) in Oslo alone owns more than 100 of his works.