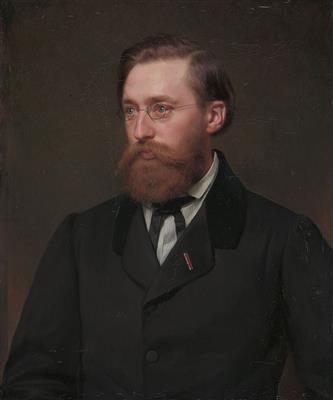 Hans Fredrik Gude (13 March 1825 – 17 August 1903) was a Norwegian romanticist painter and is considered along with Johan Christian Dahl to be one of Norway's foremost landscape painters. He has been called a mainstay of Norwegian National Romanticism. He is associated with the Düsseldorf school of painting.


Gude's artistic career was not one marked with drastic change and revolution, but was instead a steady progression that slowly reacted to general trends in the artistic world. Gude's early works are of idyllic, sun-drenched Norwegian landscapes which present a romantic, yet still realistic view of his country. Around 1860 Gude began painting seascapes and other coastal subjects. Gude had difficulty with figure drawing initially and so collaborated with Adolph Tidemand in some of his painting, drawing the landscape himself and allowing Tidemand to paint the figures. Later Gude would work specifically on his figures while at Karlsruhe, and so began populating his paintings with them. Gude initially painted primarily with oils in a studio, basing his works on studies he had done earlier in the field. However, as Gude matured as a painter he began to paint en plein air and espoused the merits of doing so to his students. Gude would paint with watercolors later in life as well as gouache in an effort to keep his art constantly fresh and evolving, and although these were never as well received by the public as his oil paintings, his fellow artists greatly admired them.


Over the course of his lifetime Gude won numerous medals, was inducted as an honorary member into many art academies, and was awarded the Grand Cross of the Order of St. Olav. He was the father of painter Nils Gude. His daughter Sigrid married german sculptor Otto Lessing.


Gude was born in Christiania in 1825 the son of Ove Gude, a judge, and Marie Elisabeth Brandt.


Gude began his artistic career with private lessons from Johannes Flintoe, and by 1838 he was attending Flintoe's evening classes at the Royal School of Drawing in Christiania. In the autumn of 1841 Johan Sebastian Welhaven suggested that the young Gude should be sent to Düsseldorf to further his education in the arts.


At the Academy of Art in Düsseldorf Gude encountered Johann Wilhelm Schirmer — a professor in landscape painting — who advised him to give up his ambitions of being a painter and to return to his regular studies before it was too late. Gude was rejected by the academy, but attracted the attention of Andreas Achenbach who provided him with private lessons.