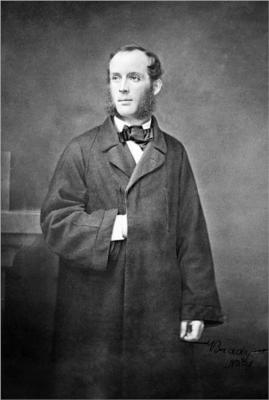 Frederic Edwin Church (May 4, 1826 – April 7, 1900) was an American landscape painter born in Hartford, Connecticut. He was a central figure in the Hudson River School of American landscape painters, perhaps best known for painting large panoramic landscapes, often depicting mountains, waterfalls, and sunsets, but also sometimes depicting dramatic natural phenomena that he saw during his travels to the Arctic and Central and South America. Church's paintings put an emphasis on light and a Romantic respect for natural detail. In his later years, Church painted classical Mediterranean and Middle Eastern scenes and cityscapes.

Frederic Edwin Church was a direct descendant of Richard Church, who was a Puritan pioneer from England who accompanied Thomas Hooker on the original journey through the wilderness from Massachusetts to what would become Hartford, Connecticut. Church was the son of Eliza (née Janes) and Joseph Church. The family's wealth came from Church's father, a silversmith and watchmaker in Hartford, Connecticut. Joseph, in turn, was the son of Samuel Church, who founded the first paper mill in Lee, Massachusetts in the Berkshires. Joseph later became an official and a director of The Aetna Life Insurance Company. The family's wealth allowed Frederic Church to pursue his interest in art from a very early age. At eighteen years of age, Church became the pupil of Thomas Cole in Catskill, New York after Daniel Wadsworth, a family neighbor and founder of the Wadsworth Athenaeum, introduced the two. In May 1849, Church was elected as the youngest Associate of the National Academy of Design and was promoted to Academician the following year. Soon after, he sold his first major work to Hartford's Wadsworth Athenaeum.

Church was the product of the second generation of the Hudson River School and the pupil of Thomas Cole, the school’s founder. The Hudson River School was established by the British Thomas Cole when he moved to America and started painting landscapes, mostly of mountains and other traditional American scenes. Both Cole and Church were devout Protestants and the latter's beliefs played a role in his paintings especially his early canvases. Cole, along with his friend Asher Durand, started this school in New York; it was the first well-acknowledged American artistic movement. The paintings were characterized by their focus on traditional American pastoral settings, especially the Catskill Mountains, and their romantic qualities. This style attempted to capture the wild realism of an unsettled America that was quickly disappearing, and the feelings of discovery and appreciation for natural beauty. His American frontier landscapes show the "expansionist and optimistic outlook of the United States in the mid-nineteenth century." Church did differ from Cole in the topics of his paintings: he preferred natural and often majestic scenes over Cole's propensity towards allegory.

Church, like most second generation Hudson River School painters, used extraordinary detail, romanticism, and luminism in his paintings. Romanticism was prominent in Britain and France in the early 1800s as a counter-movement to the Enlightenment virtues of order and logic. Artists of the Romantic period often depicted nature in idealized scenes that depicted the richness and beauty of nature, sometimes also with emphasis on the grand scale of nature.