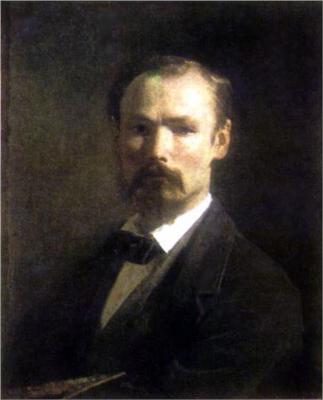 Johann Köler (8 March 1826 – 22 April 1899) was a leader of the Estonian national awakening and a painter. He is considered as the first professional painter of the emerging nation. He distinguished himself primarily by his portraiture and to a lesser extent by his landscape paintings. Some of his most notable pictures depict the Estonian rural life in the second half of the 19th century.

Johann Köler was born as the seventh child to a peasant family in Lubjassaare farmstead in Wast (present-day Ivaski), Viljandi County. Despite the poverty of the parents Köler managed to attend the elementary and the district schools in Fellin (present-day Viljandi), Livonia. Then he attended a workshop of master painters in Võnnu. In 1846, Köler travelled to St. Petersburg to work as a sign writer, where his talent was soon discovered. From 1848 to 1855 Johan Köler studied drawing and painting at the St. Petersburg Imperial Academy of Arts.

During 1857 Köler travelled to Paris via Berlin, later returned to Germany, then travelled to the Netherlands and Belgium. In 1858, he travelled across the Alps to Milan, Geneva, Florence and Rome. There, he studied in a private academy and devoted his time to watercolor technique. In Rome during 1859 he presented his composition "Christ on the Cross".

The peak of Johann Köler's career coincided with the rise of the Estonian national awakening and he used his position in the imperial court to promote the cause of the Estonian people. He also was a friend of the journalist Carl Robert Jakobson, one of the authors of the idea of the Estonian self-determination.

From 1891 to 1893 Köler was the president of the Society of Estonian Literati (Eesti Kirjameeste Selts).

The town of Viljandi ingaugurated a monument to Köler in 1976. Eesti Post issued a commemorative postage stamp celebrating the 175th anniversary of his birth in 2001.