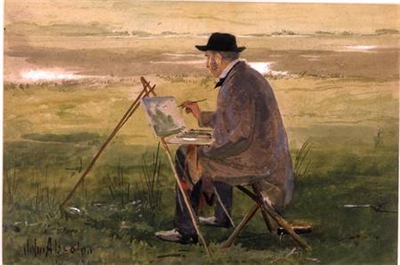 John Absolon (1815 – May 5, 1895) was a British watercolourist, specialising in figure painting. He studied in London and then Paris.


Absolon was born in Lambeth in May 1815. He was described in a profile in the Art Journal as "one among many artists who have raised themselves by energy and perseverance alone to a good position in their profession and in society". By the age of 15 he was earning a living as a portrait painter, and two years later he was working as a theatrical scene-painter, contributing the figures to stage sets at Drury Lane and Covent Garden. He showed two oil paintings on religious subjects at the British Institution in 1837, but dissatisfied with the direction of his work, left for Paris the next year, accompanied by his wife. He stayed there for almost a year, supporting himself by painting miniatures. From 1839 he exhibited at the New Watercolour Society, of which he had become a member before his departure for France. He resigned from the society in 1858 to concentrate on oil painting, and showed several works at the Royal Academy, but returned to it in 1861.


In 1843 he was commissioned to produce illustrations for an edition of Isaac Walton's Compleat Angler, and the next year the publisher David Bogue employed him to provide drawings for an edition of the poems of James Beattie and William Collins.


He contributed the figures to "The Overland Mail" an attraction exhibited at the 'Gallery of Illustration' in Regent Street, described in an advertisement as "a gigantic moving diorama of the route of the overland mail to India". He later visited Switzerland and Italy, and exhibited scenes from the two countries.

James Dafforne, writing in the Art Journal, said of Absolon:


This article contains content from the Owl Edition of Nordisk familjebok, a Swedish encyclopedia published between 1904 and 1926, now in the public domain.