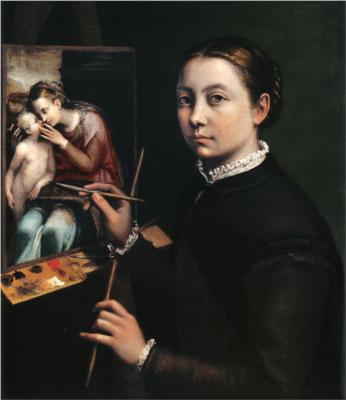 Sofonisba Anguissola (c. 1532 – 16 November 1625), also known as Sophonisba Angussola or Anguisciola, was an Italian Renaissance painter born in Cremona to a relatively poor noble family. She received a well-rounded education, that included the fine arts, and her apprenticeship with local painters set a precedent for women to be accepted as students of art. As a young woman, Anguissola traveled to Rome where she was introduced to Michelangelo, who immediately recognized her talent, and to Milan, where she painted the Duke of Alba. The Spanish queen, Elizabeth of Valois, was a keen amateur painter and in 1559 Anguissola was recruited to go to Madrid as her tutor, with the rank of lady-in-waiting. She later became an official court painter to the king, Philip II, and adapted her style to the more formal requirements of official portraits for the Spanish court. After the queen's death, Philip helped arrange an aristocratic marriage for her. She moved to Sicily, and later Pisa and Genoa, where she continued to practice as a leading portrait painter.

Her most distinctive and attractive paintings are her portraits of herself and her family, which she painted before she moved to the Spanish court. In particular, her depictions of children were fresh and closely observed. At the Spanish court she painted formal state portraits in the prevailing official style. Later in her life she also painted religious themes, although many of her religious paintings have been lost. In 1625, she died at age ninety-three in Palermo. Anguissola's example, as much as her oeuvre, had a lasting influence on subsequent generations of artists, and her great success opened the way for larger numbers of women to pursue serious careers as artists. Her paintings can be seen at galleries in Boston, MA (Isabella Stewart Gardner Museum); Milwaukee, Wisconsin (Milwaukee Art Museum); Bergamo; Brescia; Budapest; Madrid (Museo del Prado); Naples; Siena; and at the Uffizi Gallery in Florence.

The art historian Giorgio Vasari wrote about Anguissola that she "has shown greater application and better grace than any other woman of our age in her endeavors at drawing; she has thus succeeded not only in drawing, coloring and painting from nature, and copying excellently from others, but by herself has created rare and very beautiful paintings."

Sofonisba Anguissola was born in Cremona, Lombardy in 1532, the oldest of seven children, six of whom were girls. Her father, Amilcare Anguissola, was a member of the Genoese minor nobility, and her mother, Bianca Ponzone, was also of noble background. The Anguissola family believed they had a connection to the ancient Carthaginians and named their first daughter after the tragic Carthaginian figure Sophonisba.

Amilcare Anguissola encouraged all his daughters (Sofonisba, Elena, Lucia, Europa, Minerva and Anna Maria) to cultivate and perfect their talents. Four of the sisters (Elena, Lucia, Europa and Anna Maria) became painters, but Sofonisba was by far the most accomplished and renowned. Elena abandoned painting to become a nun. Both Anna Maria and Europa gave up art upon marrying, while Lucia Anguissola, the best painter of Sophonisba's sisters, died young. The remaining sister, Minerva, became a writer and Latin scholar. Asdrubale, Sophonisba's brother, studied music and Latin, but not painting.