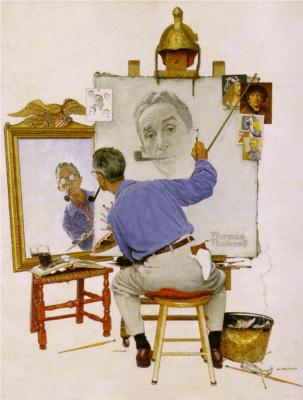 Norman Perceval Rockwell was a 20th-century American author, painter, and illustrator. His work is loved by Americans for its reflection of American culture, making him one of the most famous artists of the USA.

Looking at Rockwell's love for provincial life, one could imagine he was born and raised on a farm. But in fact, he was born in New York City, and raised in a popular neighborhood, experiencing all the violence of city gangs. The family used to spend holidays in the countryside, and, from an early age, the artist developed an idyllic vision of rural life. The family house was full of books and Rockwell copied illustrations, improving his technique. At the age of 14, he enrolled at the Chase Art School in Manhattan, and later the National Academy of Design and the Art Students League. His aim was to become not a painter, but a professional illustrator.

At 16, Rockwell started professionally illustrating Christmas themes for greeting cards. Then in 1911, he illustrated his first book Tell-Me-Why: Stories about Mother Nature by C.H. Claudy. The artist began to collaborate with some youth magazines, such as Boy's Life, and created the first cover, Scout at Ship's Wheel (1913). In 1914, at the age of 19 Rockwell became an artistic director of the magazine.

With the outbreak of the First World War, the artist attempted to enlist in the US Navy but was rejected because he was too thin. He put on weight as quickly as possible and was drafted, with the task of being a military artist: he did not fight actively, but developed his artistic talent at the service. At 21, he moved with his family to New Rochelle, a New York suburb. He opened there a studio with a cartoonist friend, Clyde Forsythe. He starter to draw for significant magazines like Life and The Saturday Evening Post; he worked for the latter continuously for 47 years, making more than three hundred covers.

Besides illustration, Rockwell loved to paint kids. He created a wonderful mythical land where children, their desires, hopes, lives, were the protagonists. This line of art was his answer to the drama of war, and to the violence, he experienced in New York in childhood. He believed that America had to look at the new generation, to build a country which can preserve its innocence and grow proper adults.

He also loved to travel, and in the 1920s -1930s he went five times to Europe, then to South America and Africa. Influenced by European art, he experimented with contemporary styles, but the director of the Post urged him to keep to his manner. In 1930, Rockwell then went to California, where he became friends with Walt Disney.

In 1939 Rockwell's family moved to Arlington, Vermont. He fell in love with the landscape, the simple way of life. In this domestic and quiet environment, Rockwell began the new artistic line that will characterize his career and make him so loved by the American people. He created dozens of sketches, paintings, illustrations of the life of the small American province, using more than 200 people of the town as models. Other illustrators joined Rockwell there, creating a sort of artistic community. Rockwell's art spread very quickly, from magazines covers to calendars, to advertisements.

When the Second World War exploded, Rockwell created a series of covers featuring the recruit Willie Gillis, a fictional character. There are more than ten images, published from 1941 to 1946, which describe the life of the typical American boy, from the first day in uniform to the happy return home from the war. Rockwell chose not to paint combat images, focusing more on the soldier's ideal than on the harshness of war.

At the same time, Norman Rockwell painted a series of paintings called The Four Freedoms, inspired by the famous speech on the four fundamental freedoms held at the congress by President Franklin D. Roosevelt. This group of works was published in 1943 on The Saturday Evening Post and reproduced in thousands of posters. Later it was exhibited in sixteen American cities by the Treasury Department to promote the collection of war funds. The artist was 43 years old, too old to serve in the army, and was comforted by the success of this work of art: it was his way of helping his country win the war, not being able to fight on the field as a soldier.

In 1964 Rockwell ended the collaboration with the Post to undertake new work experience with the magazine Look. Over the ten years, he created illustrations representing his deepest interest in civil rights, the fight against poverty, the Vietnam war, and the conquest of space. In 1977 Rockwell received the Presidential Medal of Freedom, the most prestigious civil award in the United States. He died in Stockbridge, Massachusetts, in 1978, due to complications of pulmonary emphysema. The first lady Rosalynn Carter attended his funeral.

Rockwell painted the American Dreams better than any other American artist in history. His images are currently part of the American cultural heritage, though he was belittled by contemporary art critics who considered him more an illustrator than a real artist.

Norman Percevel Rockwell (February 3, 1894 – November 8, 1978) was a 20th-century American author, painter and illustrator. His works have a broad popular appeal in the United States for their reflection of American culture. Rockwell is most famous for the cover illustrations of everyday life he created for The Saturday Evening Post magazine over nearly five decades. Among the best-known of Rockwell's works are the Willie Gillis series, Rosie the Riveter, The Problem We All Live With, Saying Grace, and the Four Freedoms series. He also is noted for his 64-year relationship with the Boy Scouts of America (BSA), during which he produced covers for their publication Boys' Life, calendars, and other illustrations. These works include popular images that reflect the Scout Oath and Scout Law such as The Scoutmaster, A Scout is Reverent and A Guiding Hand, among many others.

Norman Rockwell was a prolific artist, producing more than 4,000 original works in his lifetime. Most of his works are either in public collections, or have been destroyed in fire or other misfortunes. Rockwell also was commissioned to illustrate more than 40 books, including Tom Sawyer and Huckleberry Finn as well as painting the portraits for Presidents Eisenhower, Kennedy, Johnson, and Nixon, as well as those of foreign figures, including Gamal Abdel Nasser and Jawaharlal Nehru. His portrait subjects included Judy Garland. One of his last portraits was of Colonel Sanders in 1973. His annual contributions for the Boy Scouts calendars between 1925 and 1976 (Rockwell was a 1939 recipient of the Silver Buffalo Award, the highest adult award given by the Boy Scouts of America), were only slightly overshadowed by his most popular of calendar works: the "Four Seasons" illustrations for Brown & Bigelow that were published for 17 years beginning in 1947 and reproduced in various styles and sizes since 1964. He painted six images for Coca-Cola advertising. Illustrations for booklets, catalogs, posters (particularly movie promotions), sheet music, stamps, playing cards, and murals (including "Yankee Doodle Dandy" and "God Bless the Hills", which was completed in 1936 for the Nassau Inn in Princeton, New Jersey) rounded out Rockwell's œuvre as an illustrator.

Rockwell's work was dismissed by serious art critics in his lifetime. Many of his works appear overly sweet in the opinion of modern critics, especially the Saturday Evening Post covers, which tend toward idealistic or sentimentalized portrayals of American life. This has led to the often-deprecatory adjective, "Rockwellesque". Consequently, Rockwell is not considered a "serious painter" by some contemporary artists, who regard his work as bourgeois and kitsch. Writer Vladimir Nabokov sneered that Rockwell's brilliant technique was put to "banal" use, and wrote in his book Pnin: "That Dalí is really Norman Rockwell's twin brother kidnapped by Gypsies in babyhood". He is called an "illustrator" instead of an artist by some critics, a designation he did not mind, as that was what he called himself.

In his later years, however, Rockwell began receiving more attention as a painter when he chose more serious subjects such as the series on racism for Look magazine. One example of this more serious work is The Problem We All Live With, which dealt with the issue of school racial integration. The painting depicts a young black girl, Ruby Bridges, flanked by white federal marshals, walking to school past a wall defaced by racist graffiti. This painting was displayed in the White House when Bridges met with President Obama in 2011.