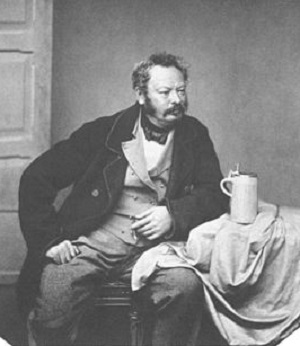 Heinrich Bürkel (1802–1869) was a German genre and landscape painter


Bürkel was born in 1802 at Pirmasens, in Rhenish Bavaria. He was designed for trade, but devoted every spare minute to drawing. His father's house, being an inn, presented him with subjects in great variety, and so early as his eleventh year he came into conflict with the police on account of a caricature of Napoleon. At fifteen he entered the law, but at twenty he was incited to
turn to art, and learned the technicalities of oil painting among friends at Munich, Schleissheim, and in the Netherlands. In time he took to depicting popular and military scenes, cattle, and landscapes, especially winter landscapes. He spent from 1823 to 1832 in Rome, and became on his return a popular artist, famous for his imagination and humour. He was an honorary member of the Academies of Munich, Dresden, and Vienna. He died at Munich in 1869.


In July 2010, three paintings by Buerkel, "Herd of Cattle," "From the Countryside" and an untitled third painting were returned to the Pirmasens Museum in Germany by U.S. Immigration and Customs Enforcement.