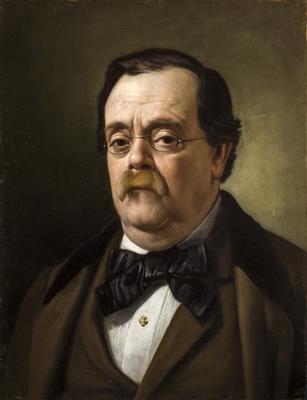 Antonio Cabral Bejarano (31 October 1798 – 1 August 1861) was a Spanish painter, considered to be an adherent of both the Europe-wide Romantic painting and the specifically Hispanic painting school of Costumbrismo. His ancestors for several earlier generations were painters, and he was initially trained by his father. He was mainly active in his native city of Seville, getting many commissions from its municipal government. He was the first Director of the Museum of Fine Arts of Seville.


He was born in Seville. His great-grandfather was the painter Diego Bejarano. He had a daughter named Maria Bejarano, who married Pedro Cabral. From this marriage was born the painter Joaquin Cabral Bejarano, a well-known painter of neoclassic style. In 1785 Joaquín married Escolástica Pérez Junquitu Fernández. It was of this marriage that Antonio Cabral Bejarano was born in 1798. Being baptized in the church of San Pedro as Antonio Joaquín María de Todos los Santos Ignacio de Loyola Quintín, he would later renounce his maternal surnames, to use only those of his father.


He received art training from his father. In 1812, after French invaders were forced to evacuate Seville, classes resumed at la Escuela de Tres Nobles Artes (School of Three Noble Arts) and Antonio Cabral entered as a student. In 1814 he collaborated with his father in the decoration of the convent of the Trinity and, in 1816, in the decoration of the General Archive of the Indies, which at the time was also a consular court. This decoration of the Archive of the Indies was made on the occasion of the passage through the city of the Portuguese pricesses María Isabel de Braganza and Francisca de Braganza, on their way to Madrid to marry, respectively, King Fernando VII and his brother Carlos María Isidro .


In 1819 he helped to build a funeral catafalque in the Cathedral of Seville in memory of the same Maria Isabel de Braganza, who tragically died in childbirth after only two years of marriage. He also made an engraving showing the catafalque for the cover of a book on the event. In 1820 he designed for the city council of Seville the decoration of a monument commemorating the Constitution of 1812.


In 1825 he was appointed Assistant Professor of Perspective at the School of Three Noble Arts.
In 1829, the City Council of Seville commissioned the construction of the "Temple of Himeneo" in the Plaza de la Encarnación, to commemorate the marriage between Fernando VII and María Cristina de Borbón.


In 1835 he was given an appointment at the San Fernando Royal Academy of Fine Arts in Madrid, in appreciation of his painting "The Decapitation of St. John the Baptist."


In 1837 he was appointed member of the management committee of the newly created Museum of Fine Arts in Seville. In 1838 the Liceo de Sevilla was founded, and he participated in the organization of various acts and exhibitions. In 1839, the Seville City Council commissioned from him an ephemeral monument, the "Temple of the Peace ", to commemorate the Peace of Vergara, by which the Carlist War was ended.