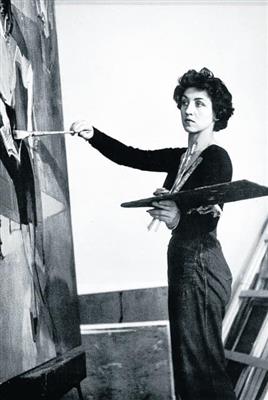 Marie Françoise Gilot (born 26 November 1921) is a French painter, best known for her long, stormy relationship with Pablo Picasso, with whom she had two children. Gilot was already launched as an accomplished artist, notably in watercolours and ceramics, but her professional career was eclipsed by her social celebrity, and when she split from Picasso, he discouraged galleries from buying her work, as well as unsuccessfully trying to block her memoir, Life with Picasso.


Gilot was born in Neuilly-sur-Seine, France, to Émile Gilot and Madeleine Gilot (née Renoult). Her father was a businessman and agronomist, and her mother was a watercolor artist. Her father was a strict, well-educated man. Gilot began writing with her left hand as a young child, but at the age of four, her father forced her to write with her right hand. As a result, Gilot became ambidextrous. She decided at the age of five to become a painter. The following year her mother tutored her in art, beginning with watercolors and India ink. Gilot was then taught by her mother's art teacher, a Mademoiselle Meuge, for six years. She studied English literature at Cambridge University and the British Institute in Paris (now University of London Institute in Paris). While training to be a lawyer, Gilot was known to skip morning law classes to pursue her true passion: art. She graduated from the Sorbonne with a B.A. in Philosophy in 1938 and from Cambridge University with a degree in English in 1939. Gilot had her first exhibition of paintings in Paris in 1943.


Gilot's father Emile wanted his daughter to be just as educated as he, and as a result, oversaw his daughter's education very closely. Gilot was tutored at home, beginning at a young age, and by the time she was six years old, she had a good knowledge of Greek mythology. By the age of fourteen, she was reading books by Edgar Allan Poe, Charles Baudelaire, and Alfred Jarry. While her father had hoped she would go to school to become a scientist or lawyer, Gilot was frequenting museums in Europe to understand and gain an appreciation for the masters. When Gilot was seventeen, she attended the Sorbonne and the British Institute in Paris and had a baccalaureate degree in Philosophy. She received her English Literature degree from Cambridge University. During 1939, Gilot's father still wanted her to complete a degree in international law, and out of fear that Paris would be bombed during the war, Gilot was sent to Rennes, France, to begin law school. At the age of 19, she abandoned her studies in law to devote her life to art. She was mentored by the artist Endre Rozsda. In 1942, after abandoning law several times, and returning on the insistence of her father, Gilot studied law for a second year and passed her written exams, but failed her oral exams.


At 21, Gilot met Pablo Picasso, then 61. Picasso first saw Gilot in a restaurant in the spring of 1943. His mistress, Dora Maar, was devastated to learn that Picasso was replacing her with the much younger artist. After Picasso's and Gilot's meeting, she moved in with him in 1946. They spent almost ten years together, and those years revolved around art. He painted La femme-fleur, then his old friend Matisse, who liked Gilot, announced that he would create a portrait of her, in which her body would be pale blue and her hair leaf green.