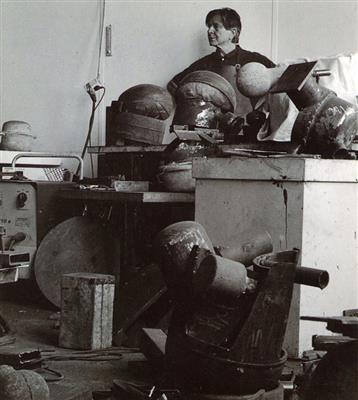 Carlos Granger in his studio in Amsterdam

Carlos Granger was born in Wisbech, England in 1933. In 1951 he joined the Royal Airforce for three years; one year he was posted at the Suez canal where the Sinai-desert made a deep impression on him as did the Mediterranean sea.

In 1954 Granger was accepted at Saint Martins School of Art in London, studying figurative art. Soon he started to practice figurative sculpture. In 1959 his study period came to an end. In the beginning of the1960s he abandoned figuration and was making non-figurative sculpture, using stone, plaster of Paris, plywood and later steel.

From 1973 to 1982 Carlos Granger interrupted his sculptural work and turned to photography of sculpture, still lifes and landscape. He continued making steel sculpture and worked exclusively in steel for a long time; sometimes he painted his sculpture.

Since 1989 Granger lives and works in Amsterdam and was connected there with gallery Josine Bokhoven. It was in the mid-90s that he started to make volumetric mass sculpture in cast concrete, often combined with steel. The result was sculpture art with subtle-balanced forms in a rough appearance of steel and concrete. Recently he works with MDF and wood, often painted.
From c. 2015 Carlos Granger makes drawings in black ink on paper.