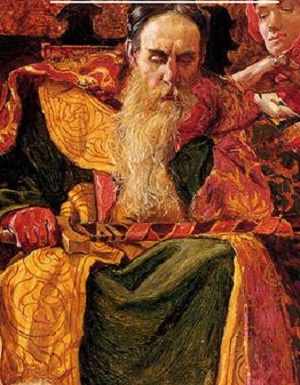 John Byam Liston Shaw (13 November 1872 – 26 January 1919), commonly known as Byam Shaw, was a British painter, illustrator, designer and teacher. He is not to be confused with his sons, Glen Byam Shaw, actor and theatre director, and James Byam Shaw, art historian and director of Colnaghi's, who both used "Byam Shaw" as a surname.

John Byam Liston Shaw was the son of John Shaw and his wife, Sophia Alicia Byam Gunthorpe. In 1899 Byam Shaw married the artist Evelyn Caroline Eunice Pyke-Nott, later known as Evelyn CE Shaw (1870–1959). Evelyn's sister was Isabel Codrington, another early twentieth century artist. Byam Shaw came from an Ayreshire family of lawyers and clerics. The Ayreshire Shaws were a cadet branch of the Shaws of Tordarroch, chiefs of the Clan Shaw. Byam Shaw's forebears included the two reverend Shaws (father and son) referred to in Burns' "Twa Herds". Evelyn's family, the Pyke-Notts, were gentry from Swimbridge and Parracombe in North Devon.

The couple had five children including the actor and theatre director Glen Byam Shaw and the art historian James 'Jim' Byam Shaw. Their only daughter, Barbara, married Rear-Admiral A.F. Pugsley. Another son, David, a naval officer and destroyer captain, awarded the OBE, was killed at sea during World War II whilst in command of HMS Stanley, and George, a major in the Royal Scots, was killed at Dunkirk in 1940 whilst second-in-command of the 1st Battalion. The family is depicted in the artist's semi-autobiographical pastel painting My Wife, My Bairns and My Wee Dog John (1903).

Byam Shaw was born in Madras; his father, John, was the registrar of the High Court at Madras. The family returned to England in 1878 where they settled in Kensington, living at 103 Holland Row. He showed early artistic promise, and in 1887 his work was shown to John Everett Millais, who recommended that the 15-year-old should enter the St John's Wood Art School. There, he first met fellow artists Gerald Fenwick Metcalfe (also born in India) and Rex Vicat Cole. He also met Evelyn Pyke-Nott, his future wife, there. From 1890, Shaw studied at the Royal Academy Schools where he won the Armitage Prize in 1892 for his work The Judgement of Solomon.

Throughout his career Byam Shaw worked competently in a wide variety of media including oils, watercolour, pastels, pen and ink and deployed techniques such as dyeing and gilding. He was influenced by the Pre-Raphaelites and took many of his subjects from the poems of Rossetti. He exhibited frequently at Dowdeswell and Dowdeswell's gallery in New Bond Street, where he had at least five solo exhibitions between 1896 and 1916.

Later in his life his popularity as an artist waned, and he turned to teaching for his living. He taught at the Women's Department of King's College London from 1904 and in 1910, with Rex Vicat Cole, he founded the Byam Shaw and Vicat Cole School of Art later renamed simply the "Byam Shaw School of Art". Evelyn Shaw had an active role in the new school, teaching the miniatures class, her area of expertise. Shaw had had a long association with the artist and illustrator Eleanor Fortescue-Brickdale, who taught at the new school.