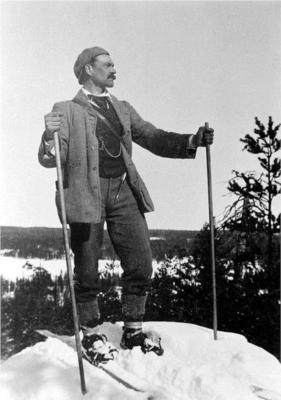 Gallen-Kallela was born Axel Waldemar Gallén in Pori, Finland in a Swedish-speaking family. His father Peter Gallén worked as police chief and lawyer. At the age of 11 he was sent to Helsinki to study at a grammar school, because his father opposed his ambition to become a painter. After his father's death in 1879, Gallen-Kallela attended drawing classes at the Finnish Art Society (1881-4) and studied privately under Adolf von Becker.

In 1884 he moved to Paris, to study at the Académie Julian. In Paris he became friends with the Finnish painter Albert Edelfelt, the Norwegian painter Carl Dörnberger, and the Swedish writer August Strindberg.

He married Mary Slöör in 1890. The couple had three children, Impi Marjatta, Kirsti and Jorma. On their honeymoon to East Karelia, Gallen-Kallela started collecting material for his depictions of the Kalevala. This period is characterized by romantic paintings of the Kalevala, like the Aino Myth, and by several landscape paintings.

In December 1894, Gallen-Kallela moved to Berlin to oversee the joint exhibition of his works with the works of Norwegian painter Edvard Munch. Here he became acquainted with the Symbolists.

In March 1895, he received a telegram that his daughter Impi Marjatta had died from diphtheria. This would prove to be a turning point in his work. While his works had previously been romantic, after his daughter's death Gallen-Kallela painted more aggressive works like the Defense of the Sampo, Joukahainen's Revenge, Kullervo Cursing and Lemminkäinen's Mother.

On his return from Germany, Gallen studied print-making and visited London to deepen his knowledge, and in 1898 studied fresco-painting in Italy.

For the Paris World Fair in 1900, Gallen-Kallela painted frescoes for the Finnish Pavilion. In these frescoes, his political ideas became most apparent. One of the vipers in the fresco Ilmarinen Plowing the Field of Vipers is wearing the Romanov crown, and the process of removing the vipers from the field was a clear reference to his wish for an independent Finland.

The Paris Exposition secured Gallen-Kallela's stature as the leading Finnish artist. In 1901 he was commissioned to paint the fresco, Kullervo Goes to War, for the concert hall of the Helsinki Student's Union. Between 1901 and 1903 he painted the frescoes for the Jusélius Mausoleum in Pori, memorializing the 11-year-old daughter of the industrialist F.A. Jusélius. (The frescoes were soon damaged by dampness, and were completely destroyed by fire in December 1931. Jusélius assigned the artist's son Jorma to repaint them from the original sketches. The reconstruction was completed just before Jorma's death in 1939.)

In 1909, Gallen-Kallela moved to Nairobi in Kenya with his family, and there he painted over 150 expressionist oil paintings and bought many east African artefacts. But he returned to Finland after a couple of years, because he realized Finland was his main inspiration. Between 1911 and 1913 he designed and built a studio and house at Tarvaspää, about 10 km northwest of the centre of Helsinki.