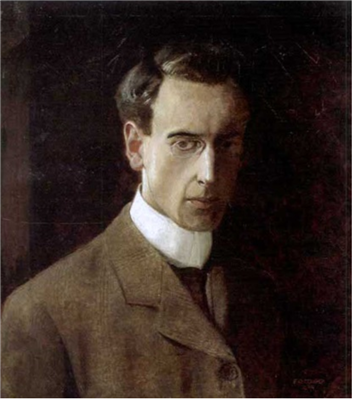 Born in Northamptonshire, Cowper studied at the Royal Academy whichlanded him his first exhibition. He then went on to study under Edwin Austin Abbey. Cowper is known as 'The last of the Pre-Raphaelites'.

Frank Cadogan Cowper RA (16 October 1877 – 17 November 1958) was an English painter and illustrator of portraits, historical and literary scenes, described as "The last of the Pre-Raphaelites".

Cowper was born in Wicken, Northamptonshire, son of an author and early pioneer of coastal cruising in yachts, Frank Cowper, and grandson of the rector of Wicken. He first studied art at St John's Wood Art School in 1896 and then went on to study at the Royal Academy Schools from 1897 to 1902. He first exhibited at the Royal Academy in 1899, and achieved critical success two years later with his An Aristocrat answering the Summons to Execution, Paris 1791 (1901). In 1902, he spent six months studying under Edwin Austin Abbey before travelling to Italy.

He worked in both watercolours and oils, and also worked as book illustrator – providing the illustrations for Sir Sidney Lee's The Imperial Shakespeare. He contributed to a mural in the Houses of Parliament in 1910 along with Byam Shaw, Ernest Board and Henry Arthur Payne.

He retired from London to Gloucestershire. His The Ugly Duckling was voted the favourite painting by visitors to the Cheltenham Art Gallery & Museum in 2005.