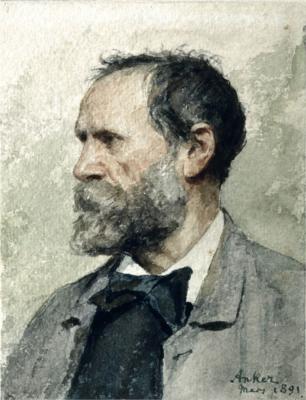 Albrecht Samuel Anker (April 1, 1831 – July 16, 1910) was a Swiss painter and illustrator who has been called the "national painter" of Switzerland because of his enduringly popular depictions of 19th-century Swiss village life.

Born in Ins as the son of veterinarian Samuel Anker (then a member of the constituent assembly of the Canton of Bern), Anker attended school in Neuchâtel, where he and Auguste Bachelin, later a fellow artist, took early drawing lessons with Louis Wallinger in 1845–48. In 1849–51, he attended the Gymnasium Kirchenfeld (de) in Bern, graduating with the Matura. Afterwards, he studied theology, beginning in 1851 in Bern and continuing at the university of Halle, Germany. But in Germany he was inspired by the great art collections, and in 1854 he convinced his father to agree to an artistic career. In Neuchâtel he got his name Albert, because it was much easier to pronounce for his French speaking classmates.

Anker moved to Paris, where he studied with Charles Gleyre and attended the École nationale supérieure des Beaux-Arts in 1855–60. He installed a studio in the attic of his parents' house and participated regularly in exhibitions in Switzerland and in Paris. Anker married Anna Rüfli in 1864, and they had six children together; the four children who did not die at an early age – Louise, Marie, Maurice and Cécile – appear in some of Anker's paintings. In 1866, he was awarded a gold medal at the Paris Salon for Schlafendes Mädchen im Walde (1865) und Schreibunterricht (1865); in 1878 he was made a knight of the Légion d'honneur. In 1870–74 he was a member of the Grand Council of Bern, where he advocated the construction of the Kunstmuseum Bern.

Apart from his regular wintertime stays in Paris, Anker frequently travelled to Italy and other European countries. In 1889–93 and 1895–98 he was a member of the Swiss Federal Art Commission and in 1900 he received an honorary doctorate from the University of Bern. A stroke in 1901 reduced his ability to work. Only after his death in 1910 was there a first exposition dedicated to him, held at the Musée d'art et d'histoire in Neuchâtel.

During his studies, Anker produced a series of works with historical and biblical themes, including paintings of Luther and Calvin. Soon after returning to Ins, though, he turned to what would become his signature theme: the everyday life of people in rural communities. His paintings depict his fellow citizens in an unpretentious and plain manner, without idealising country life, but also without the critical examination of social conditions that can be found in the works of contemporaries such as Daumier, Courbet or Millet. Although Anker did paint occasional scenes with a social significance, such as visits by usurers or charlatans to the village, his affirmative and idealistic Christian world-view did not include an inclination to issue any sort of overt challenge.

Also prominent in Anker's work are the more than 30 still lifes he created. They depict both rural and urban table settings in the tradition of Chardin, their realist solidity reflecting Anker's vision of a harmonic and stable world order. In addition, Anker created hundreds of commissioned watercolours and drawings, mostly portraits and illustrations, including for an edition of Jeremias Gotthelf's collected works. To provide for a steady income, Anker also decorated more than 500 faience plates for the Alsatian producer Théodore Deck.