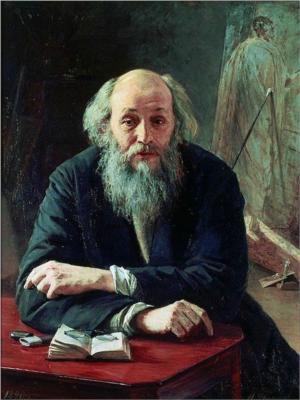 Nikolai Ge was born in Voronezh to a Ukrainian noble family of French origin. His grandfather immigrated to Russian Empire during the 18th century. His grandfather, Osip Ge, married Daria Korostovtseva, the daughter of the Poltava landowner Yakov Korostovtsev. The father of the artist Nikolai Osipovich Ge was married twice. After the death of his first wife Elena Sadovska (mother of the artist), the family moved to his father's estate in the village Popelyuhy, Podolia Governorate (now Vinnytsia Oblast), where his father, Nikolai Osipovich, dedicated himself to agriculture in order to leave an inheritance to his sons. In 1840, a nine-year-old boy was taken to Kyiv and Ge was raised by a serf nurse. He graduated from the First Kyiv Gymnasium and then went on to study at the physics and mathematics at Kyiv University and Saint Petersburg University.

In 1850, Ge gave up his career in science and enrolled in the Imperial Academy of Arts in Saint Petersburg. He studied under the guidance of master painter Pyotr Basin. In 1857, he graduated from the Academy where he received a gold medal for his painting, The Witch of Endor Invoking the Spirit of the Prophet Samuel. According to Ge, during that period he was strongly influenced by Karl Briullov.

The gold medal secured a scholarship for Ge to study abroad. He visited Germany, Switzerland and France. In 1860 he settled in Italy. Ge met Alexander Andreyevich Ivanov in Rome, a strongly influence on him.

In 1861, Ge painted The Last Supper using a photograph of Levitsky's cousin, Aleksandr Ivanovich Herzen taken by Russian photographer Sergei Lvovich Levitsky as an image for his central figure of Christ.

Ge recounted, "I wanted to go to London to paint Herzen's portrait" [...] and he responded to my request with a large portrait by Mr. Levitsky." The final painting's similarity between the pose of Levitsky's photo of Herzen and Ge's pose of the painted Christ led the press of the day to hail the painting as "a triumph of materialism and nihilism".

This was the first known occasion on which photography was used as the main source for a central character in a painting and speaks to the deep influences that photography would have later on in art and movements like French Impressionism.

The painting (first purchased by Tsar Alexander II of Russia) made such a strong impression when it was shown in Saint Petersburg in 1863 that Ge was made a professor of Imperial Academy of Arts.

In 1864, Ge returned to Florence and painted not only Herzen's portrait but also the Messengers of the Resurrection and the first version of Christ on the Mount of Olives. The new paintings were not much of a success and the Imperial Academy refused to exhibit them in its annual exhibition.