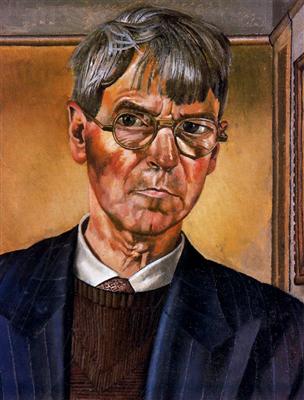 Stanley Spencer was one of the leading figures in British art between the World Wars. He was born in 1891 in the historic village of Cookham, which would play a pivotal role in his art. From 1908 to 1912, Spencer attended the Slade School of Fine Art in London, where he studied with other notable artists of his generation: David Bomberg, Dora Carrington, Maxwell Gordon Lightfoot, Mark Gertler, and Paul Nash. During World War I, Spencer served in the army, first at the Beaufort War Hospital in Bristol and then in Macedonia. He drew on his personal experience when painting Travoys Arriving with Wounded at a Dressing Station at Smol, Macedonia, September 1916 (1919) that was commissioned by the British War Memorials Committee. Although the painting showed the endless lines of wounded, Spencer who was a devout Christian maintained: “I meant it not as a scene of horror but a scene of redemption”. Around the same time, Spencer met the painter Hilda Carline, whom he married in 1925.

In 1927, Spencer had his first one-man show at the Goupil Gallery in London. He received rave reviews, especially for the monumental painting The Resurrection, Cookham (1924-1927), that was described by The Times as “the most important picture painted by any English artist in the present century”. The painting shows everyday people emerging from their graves watched by God, Christ, and prophets. Spencer chose to set the scene in the Cookham churchyard. For Spencer, Cookham was “a village in Heaven”, and in his paintings, he tried to express the mystical qualities he found in ordinary activities: “Quite suddenly I became aware that everything was full of special meaning, and this made everything holy... I observed the scared quality in the most unexpected quarters.” Following his success, Spencer began working on a series of murals for the Sandham Memorial at Burghclere in Hampshire (1927-1932). Once again Spencer drew on his personal experience of the War, but rather than focus on grand themes of heroism and sacrifice, he portrayed the life of the common soldier. Inspired by Giotto’s Arena Chapel in Padua, Spencer arranged the paintings in the Chapel to resemble altarpieces in a Renaissance church nave.

Spencer’s career stabilized in the following decade, and immediately following World War II he worked on two large painting series: Shipbuilding on the Clyde (1939-1945) that commemorated the war effort and the Port Glasgow Resurrection (1939-1945), inspired by the graveyard near the town Port Glasgow. Both series received critical acclaim, and Spencer rejoined the Royal Academy in 1950. In his final years, he worked intensely on his most ambitious project the ‘Church-house’ – a half-religious, half-secular space intended for the exhibition of his paintings. Despite extensive plans that date back to World War I, the project never materialized. Spencer was knighted in 1959 and died that same year of cancer.

Sir Stanley Spencer CBE RA (30 June 1891 – 14 December 1959) was an English painter. Shortly after leaving the Slade School of Art, Spencer became well known for his paintings depicting Biblical scenes occurring as if in Cookham, the small village beside the River Thames where he was born and spent much of his life. Spencer referred to Cookham as "a village in Heaven" and in his biblical scenes, fellow-villagers are shown as their Gospel counterparts. Spencer was skilled at organising multi-figure compositions such as in his large paintings for the Sandham Memorial Chapel and the Shipbuilding on the Clyde series, the former being a First World War memorial while the latter was a commission for the War Artists' Advisory Committee during the Second World War.

As his career progressed Spencer often produced landscapes for commercial necessity and the intensity of his early visionary years diminished somewhat while elements of eccentricity came more to the fore. Although his compositions became more claustrophobic and his use of colour less vivid he maintained an attention to detail in his paintings akin to that of the Pre-Raphaelites. Spencer's works often express his fervent if unconventional Christian faith. This is especially evident in the scenes that he based in Cookham which show the compassion that he felt for his fellow residents and also his romantic and sexual obsessions. Spencer's works originally provoked great shock and controversy. Nowadays, they still seem stylistic and experimental, while the nude works depicting his futile relationship with his second wife, Patricia Preece, such as the Leg of mutton nude, foreshadow some of the much later works of Lucian Freud. Spencer's early work is regarded as a synthesis of French Post-Impressionism, exemplified for instance by Paul Gauguin, plus early Italian painting typified by Giotto. In later life Spencer remained an independent artist and did not join any of the artistic movements of the period, although he did show three works at the Second Post-Impressionist Exhibition in 1912.

Stanley Spencer was born in Cookham, Berkshire, the eighth surviving child of William and Anna Caroline Spencer (née Slack). His father, usually known as Par, was a music teacher and church organist. Stanley's younger brother, Gilbert Spencer (1892–1979), also became a notable artist, known principally for his landscape paintings. The family home, "Fernlea", on Cookham High Street, had been built by Spencer's grandfather Julius Spencer. Stanley Spencer was educated at home by his sisters Annie and Florence, as his parents had reservations about the local council school but could not afford private education for him. However, Gilbert and Stanley took drawing lessons from a local artist, Dorothy Bailey. Eventually, Gilbert was sent to a school in Maidenhead, but the family did not feel this would be beneficial for Stanley, who was developing into a solitary teenager given to long walks, yet with a passion for drawing. Par Spencer approached local landowners, Lord and Lady Boston, for advice, and Lady Boston agreed Stanley could spend time drawing with her each week. In 1907 Lady Boston arranged for Stanley to attend Maidenhead Technical Institute, where his father insisted he should not take any exams.