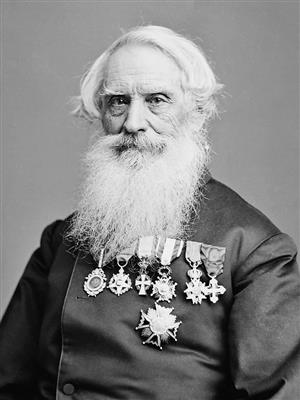 Samuel Finley Breese Morse (April 27, 1791 – April 2, 1872) was an American painter and inventor. After having established his reputation as a portrait painter, in his middle age Morse contributed to the invention of a single-wire telegraph system based on European telegraphs. He was a co-developer of Morse code and helped to develop the commercial use of telegraphy.

Samuel F. B. Morse was born in Charlestown, Massachusetts, the first child of the pastor Jedidiah Morse (1761–1826), who was also a geographer, and his wife Elizabeth Ann Finley Breese (1766–1828). His father was a great preacher of the Calvinist faith and supporter of the American Federalist party. He thought it helped preserve Puritan traditions (strict observance of Sabbath, among other things), and believed in the Federalist support of an alliance with Britain and a strong central government. Morse strongly believed in education within a Federalist framework, alongside the instillation of Calvinist virtues, morals, and prayers for his first son.

After attending Phillips Academy in Andover, Massachusetts, Samuel Morse went on to Yale College to receive instruction in the subjects of religious philosophy, mathematics, and science of horses. While at Yale, he attended lectures on electricity from Benjamin Silliman and Jeremiah Day and was a member of the Society of Brothers in Unity. He supported himself by painting. In 1810, he graduated from Yale with Phi Beta Kappa honors.

Morse expressed some of his Calvinist beliefs in his painting, Landing of the Pilgrims, through the depiction of simple clothing as well as the people's austere facial features. His image captured the psychology of the Federalists; Calvinists from England brought to North America ideas of religion and government, thus linking the two countries. This work attracted the attention of the notable artist, Washington Allston. Allston wanted Morse to accompany him to England to meet the artist Benjamin West. Allston arranged—with Morse's father—a three-year stay for painting study in England. The two men set sail aboard the Libya on July 15, 1811.

In England, Morse perfected his painting techniques under Allston's watchful eye; by the end of 1811, he gained admittance to the Royal Academy. At the Academy, he was moved by the art of the Renaissance and paid close attention to the works of Michelangelo and Raphael. After observing and practicing life drawing and absorbing its anatomical demands, the young artist produced his masterpiece, the Dying Hercules. (He first made a sculpture as a study for the painting.)

To some, the Dying Hercules seemed to represent a political statement against the British and also the American Federalists. The muscles symbolized the strength of the young and vibrant United States versus the British and British-American supporters. During Morse's time in Britain, the Americans and British were engaged in the War of 1812. Both societies were conflicted over loyalties. Anti-Federalist Americans aligned themselves with the French, abhorred the British, and believed a strong central government to be inherently dangerous to democracy.

As the war raged on, Morse's letters to his parents became more anti-Federalist in tone. In one such letter, Morse wrote: