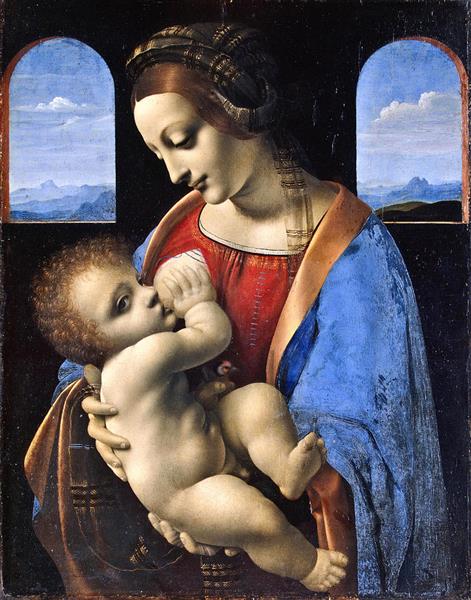 High Renaissance artists were influenced by the linear perspective, shading, and naturalistic figurative treatment launched by Early Renaissance artists like Masaccio and Mantegna. But they mastered those techniques in order to convey a new aesthetic ideal that primarily valued beauty. The human figure was seen as embodying the divine, and new techniques like oil painting were employed to convey human movement and psychological depth in gradations of tone and color. Drawing upon the classical Greek and Roman proportional preciseness in architecture and anatomical correctness in the body, masters like Leonardo, Michelangelo, and Raphael created powerful compositions where the parts of their subjects were illustrated as harmonious and cohesive with the whole.

While High Renaissance painting continued the tradition of fresco painting in connection with religious scenes, the practice of masters like Raphael, Leonardo, and Michelangelo was informed by innovations of the medium. For example, to paint the Sistine Chapel, Michelangelo not only designed a scaffolding system to reach the area but developed a new formula and application for fresco to counter the problem of mold, as well as a wash technique and the use of a variety of brushes, to first apply color then, later, add fine detail, shading, and line. For his Last Supper (c.1495), Leonardo experimented by working on dry fresco and used a combination of oil and tempera to achieve an oil painting effect. Raphael, Leonardo, and Michelangelo all employed trompe l'oeil in their frescoes, a technique by which to achieve the optical illusion of three dimensions, a pictorial space integrates into its surrounding architectural environment. Quadratura or ceiling paintings, were born at this time, meant to rapturously draw the gaze of viewers up into a heavenly visage.

At the same time, many masterworks of the High Renaissance were, for the first time, being painted in oil, typically on wood panels but sometimes on canvas. Because oils provided more possibilities in subtle tonal and color gradations, the resulting works were more life-like. As a result, a new body of compelling portraiture of ordinary people emerged. Leonardo's Mona Lisa (c.1519) is undoubtedly the most famous example. Other High Renaissance artists like Andrea del Sarto in his Madonna of the Harpies (1517) and Fra Bartolomeo in his Portrait of Girolamo Savonarola (c. 1497-1498) also created powerful works in oil.

Leonardo's practice of oil painting led him to develop a new technique called sfumato, meaning "vanished gradually like smoke." It involved using translucent glazes worked by brush to create gradual transitions between tones of light and shadow. The result was, as Leonardo wrote, "without lines or borders, in the matter of smoke," creating a vivid imitation of reality lacking all evidence of the artist's brushstrokes. Other High Renaissance artists like Raphael, Fra Bartolomeo, and Correggio also mastered the style, which later greatly influenced Renaissance painters of the Venetian School like Giorgione, and later, the Mannerist painters. Raphael's mastery of sfumato can be seen particularly in his treatment of the Virgin's face in his Madonna with the Christ Child and Saint John the Baptist (1506).

The leading architect of the High Renaissance was Donato Bramante, most noted for his emphasis on classical harmony, employment of a central plan, and rotational symmetry, as seen in his Tempietto (c.1500). Rotational symmetry involved the use of octagons, circles, or squares so that a building retained the same shape from multiple points of view. He also created the first trompe l'oeil effect for architectural purposes at the church of Santa Maria presso San Satiro in Milan. Due to the presence of a road behind the wall of the church, only three feet remained for the choir area, so the architect used linear perspective and painting to create an illusionary sense of expanded space.

Bramante's student Antonio da Sangallo the Younger designed the Palazzo Farnese which was called by Sir Barister Fletcher, "The most imposing Italian palace of the 16th century." The design adhered to classical principles, had a Spartan simplicity, and used rustication, which left the building stone in its textured and unfinished state allowing for natural lines and color. The era, however, was marked by competing designs and personal rivalries. Cardinal Farnese who became Pope Paul III in 1534 was dissatisfied with the cornice design of the Palazzo and held a competition for a new design, which was awarded to Michelangelo. The popular story recounts how Sangallo the Younger died of shame the following year, as Michelangelo completed the building's final touches.

Michelangelo was Bramante's chief rival, as, in later life, he worked as an architect. He designed the Laurentian Library in Florence and created the dome for St. Peter's Basilica, though the building as a whole reflected the work of Bramante, Raphael, and later architects like Bernini. This work, which took place between 1523-1571, was particularly innovative; creating a dynamic sense of movement in the staircase and wall features that were influential upon later architects.

The undoubted master of sculpture during the High Renaissance was Michelangelo whose Pietà (1499), finished when he was only twenty-four, launched his career. He chose to depict an unusually youthful Virgin Mary holding the dead Christ in her lap. Although the treatment of this scene was popular in France, it was entirely new to Italian art. The work's pyramidal composition and naturalistic figurative treatment created a powerfully classical effect. Yet, the work also showed innovative variations. The monumental scale of the Virgin in comparison to Christ lent a highly emotional maternal aspect to the piece and became a signature method for the artist in his work, this manipulation of high contrast. Unlike Early Renaissance sculptors like Donatello who worked in bronze, Michelangelo single-handedly revived the classical use of marble, and injected elements of monumentality into all of his subsequent sculptures, both in the size of the figures, and the scale of the projects.

Leonardo also explored sculpture, notably designing the world's largest bronze equestrian statue. Commissioned by the Duke of Milan in 1482 to honor his father, the project was never completed, as the artist's 24-foot tall clay model was destroyed by the French army invasion of Milan in 1499. Several versions of the horse, based upon the artist's drawings, have been completed in modern times.

The period of High Renaissance is noted for infusing ideals of beauty back into art. Whether depicting religious figures or everyday citizens, in architecture and in art, the High Renaissance artists' key concerns were to present pieces of visual, symmetrical, and compositional perfection.