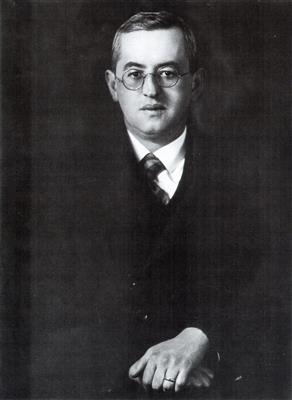 Josef Čapek (Czech pronunciation: [ˈjozɛf ˈtʃapɛk]; 23 March 1887 – April 1945) was a Czech artist who was best known as a painter, but who was also noted as a writer and a poet. He invented the word robot, which was introduced into literature by his brother, Karel Čapek.


Čapek was born in Hronov, Bohemia (Austria-Hungary, later Czechoslovakia, now the Czech Republic) in 1887. First a painter of the Cubist school, he later developed his own playful, minimalist style. He collaborated with his brother Karel on a number of plays and short stories; on his own, he wrote the utopian play Land of Many Names and several novels, as well as critical essays in which he argued for the art of the unconscious, of children, and of 'savages'. He was named by his brother as the true inventor of the term robot. As a cartoonist, he worked for Lidové Noviny, a newspaper based in Prague.
Due to his critical attitude towards national socialism and Adolf Hitler, he was arrested after the German invasion of Czechoslovakia in 1939. He wrote Poems from a Concentration Camp in the Bergen-Belsen concentration camp, where he died in 1945. In June 1945 Rudolf Margolius, accompanied by Čapek's wife Jarmila Čapková, went to Bergen-Belsen to search for him. His remains were never found. In 1948 the court officially set the date of his death, the day which he did not survive being 30 April 1947.


His illustrated stories Povídání o Pejskovi a Kočičce (All About Doggie and Pussycat) are considered classics of Czech children's literature.