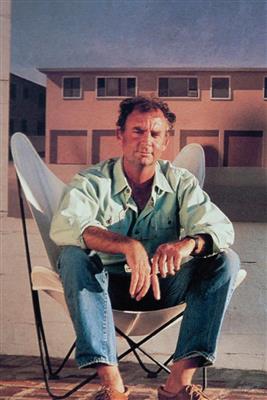 John Register (1939–1996) was an American realist artist noted for his paintings and drawings, which were notably often minimalist, spare depictions of hotels, cafés, and empty chairs.


Register was born in 1939 in New York City to Dorothy Deming Pratt Register (1909-1998) and Samuel Croft Register. His parents divorced when he was three, and his father died when he was eleven. His maternal great-grandfather, Charles Pratt was one of John D. Rockefeller's partners in the formation of the Standard Oil Company (now Exxon), as well as founder of Charles Pratt and Company in New York and Pratt Institute in Brooklyn.


Register graduated from the Lawrenceville School in New Jersey. After graduating from the University of California, Berkeley, with B.A. in Literature in 1961, he met his wife Catherine Richards in a photography class at Pasadena Art Center where he studied commercial art. Register also studied painting for a semester at the Académie Julian in Paris, and later studied at the California School of Fine Arts in San Francisco.


In 1964 the two moved to New York, where Register studied design and television at the Pratt Institute (founded by his great-grandfather). They were engaged in late 1963 and married on February 6, 1964, ultimately having three children. While living in New York, Register pursued a successful career as an advertising art director at Young & Rubicam and later McCaffrey and McCall — and lived in a Fifth Avenue apartment.


In 1972, just after his 33rd birthday, and unhappy with his work, Register excused himself from an important client meeting saying he had a dental appointment. He wrote a note to his boss and never returned. He subsequently became a full-time painter, spent a year in New York painting every day, and studied briefly at the Art Students League — before moving with his family to California. His interests included racing cars and ice-boats, photography, tennis, running, competitive chess, letter writing, reading, backpacking, fishing, and surfing.


Register was born with a genetic kidney disease and suffered kidney failure 15 years before his death. He received a kidney transplant from his sister in 1981 and, when that failed, received another transplant in 1985. In September 1994, he was told he had four to six weeks to live. He lived instead for 18 months, battling cancer (caused by anti-rejection medication) until his death in 1996 at the age of 57, in Malibu, California.


Register said "I look for offbeat beauty. I don't know what I'm looking for until I find it. There are things so ugly that I can't paint them. Sometimes I get depressed by that city, and by other cities I visit. But I like the patina of things that have been battered by life".