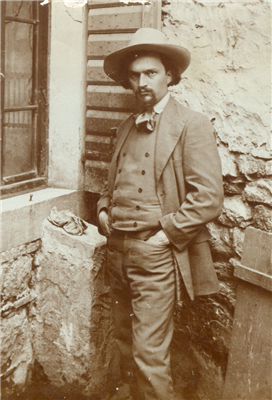 He was the most prominent sculptor of Croatian modern sculpture and a leading personality of artistic life in Zagreb. He studied at the Pavle Bilinić's Stone Workshop in Split and at the Academy of Fine Arts Vienna, where he was formed under the influence of the Secession. He traveled throughout Europe and studied the works of ancient and Renaissance masters, especially Michelangelo, and French sculptors A. Rodin, A. Bourdelle and A. Maillola. He was the initiator of the national-romantic group Medulić (he advocated the creation of art of national features inspired by the heroic folk songs). During the First World War, he lived in emigration. After the war, he returned to Croatia and began a long and fruitful period of sculpture and pedagogical work. In 1942 he emigrated to Italy, in 1943 to Switzerland and in 1947 to the United States. He was a professor of sculpture at the Syracuse University and from 1955 at the University of Notre Dame in South Bend, Indiana.

Most of his early works of symbolic themes were formed in the spirit of the Secession, some of which, like the Well of Life, show impressionist restless surfaces created under the influence of Rodin's naturalism, and the second, reviving national myth, become stylized monumental plastics (Kosovo cycle, 1908-1910). Before the First World War, he left pathetic epic stylization, expressing increasingly emotional states, as evidenced by the wooden reliefs of biblical themes made in a combination of Archaic, Gothic, Secessionist and Expressionist styles. During the 1920s and 1930s, the classical component prevailed in his works. In this period, he created a number of public monuments of strong plastic expression, pronounced and legible shapes (Grgur Ninski and Marko Marulić in Split, Andrija Medulić, Andrija Kačić-Miošić and Josip Juraj Strossmayer in Zagreb, The Bowman and The Spearman in Chicago). Portraits take a special place in his opus.

Meštrović achieved works of strong plastic value in the construction-sculptural monuments and projects, mostly with central layout (the Mausoleum of the Račić family in Cavtat, the Mausoleum of the Meštrović family in Otavice, the Meštrović Pavilion in Zagreb, Monument to the Unknown Hero in Belgrade). He also designed a memorial church of King Zvonimir in Biskupija near Knin inspired by old Croatian churches, a representative family palace, today the Ivan Meštrović Gallery, and reconstructed renaissance fortified mansion Crikvine-Kaštilac in Split.

He was born in Vrpolje, Slavonia, and spent his childhood in the small Dalmatian village of Otavice, the native place of his parents in the Dinaric Alps. His father was a poor peasant and sheep-breeder. At the age of sixteen he was accepted as an apprentice by Pavle Blinić, a master of a stonemasonry in Split.

His artistic skills were improved by studying the monumental buildings in the city and his education at the hands of Bilinić's wife, who was a high-school teacher. Soon, they found a mine owner from Vienna who paid for Meštrović to move there and be admitted to the Academy of Fine Arts where he studied under Edmund von Hellmer and Otto Wagner. Quickly he had to learn German from scratch and adjust to the new environment, but he persevered and successfully finished his studies.