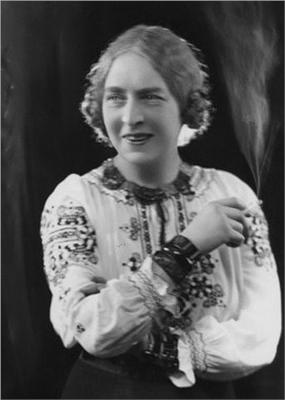 Dame Laura Knight, (née Johnson), DBE RA RWS (4 August 1877 – 7 July 1970) was an English artist who worked in oils, watercolours, etching, engraving and drypoint. Knight was a painter in the figurative, realist tradition and who embraced English Impressionism. In her long career, Knight was among the most successful and popular painters in Britain. Her success in the male-dominated British art establishment paved the way for greater status and recognition for women artists.

In 1929, she was created a Dame, and in 1936 became the first woman elected to full membership of the Royal Academy since its foundation in 1768. Her large retrospective exhibition at the Royal Academy in 1965 was the first for a woman. Knight was known for painting amidst the world of the theatre and ballet in London, and for being a war artist during the Second World War. She was also greatly interested in, and inspired by, marginalised communities and individuals, including Gypsies and circus performers.

Laura Johnson was born in Long Eaton, Derbyshire, the youngest of the three daughters of Charles and Charlotte Johnson. Her father abandoned the family not long after her birth, and Knight grew up amid financial problems. Her grandfather owned a lace-making factory but the advent of new technology led to the business going bankrupt. The family had relations in northern France who were also in the lace-making business and in 1889 Knight was sent to them with the intention that she would eventually study art at a Parisian atelier. After a miserable time in French schools, the bankruptcy of her French relations forced Knight to return to England.

Charlotte Johnson taught part-time at the Nottingham School of Art, and managed to have Knight enrolled as an 'artisan student' there, paying no fees, aged just 13. At the age of fifteen, and still a student herself, Knight took over her mother's teaching duties when Charlotte was diagnosed with cancer and became seriously ill. Later Knight won a scholarship and the gold medal in the national student competition held by the then South Kensington Museum. She continued to give private lessons after she left the School of Art, as both she and her sister Evangeline Agnes, known as Sissie, had been left to live alone on very little money, after the deaths of their mother, their sister Nellie and both their grandmothers. At the School of Art, Laura met one of the most promising students, Harold Knight, then aged 17, and determined that the best method of learning was to copy Harold's technique. They became friends, and married in 1903.

In 1894 the couple visited Staithes, a fishing village on the Yorkshire coast, for a holiday and soon returned, accompanied by her sister Evangeline Agnes, to live and work there. In Staithes Laura drew the people of the fishing village and the surrounding farms, showing the hardship and poverty of their lives. She made studies, paintings and watercolours, often painting in muted, shadowy tones. Lack of money for expensive materials meant she produced few oil paintings at this time. Local children would sit for her, for pennies, giving her the opportunity to develop her figure painting technique. Less successful at this time were her landscape and thematic works. Although she painted on the moors, high inland from Staithes, she did not consider herself successful at resolving these studies into finished pieces. Later she recalled: