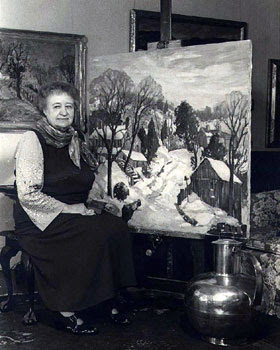 She became well known for her work as a landscape impressionist who painted scenes that were blanketed with snow, such as the villages and farms of Bucks County. Her works included Autumn Gold, Bucks County Scene, Lumberville, Lumberville Cottage, Old House, Spring on the Delaware, The Delaware Valley, and The Delaware Reflections.